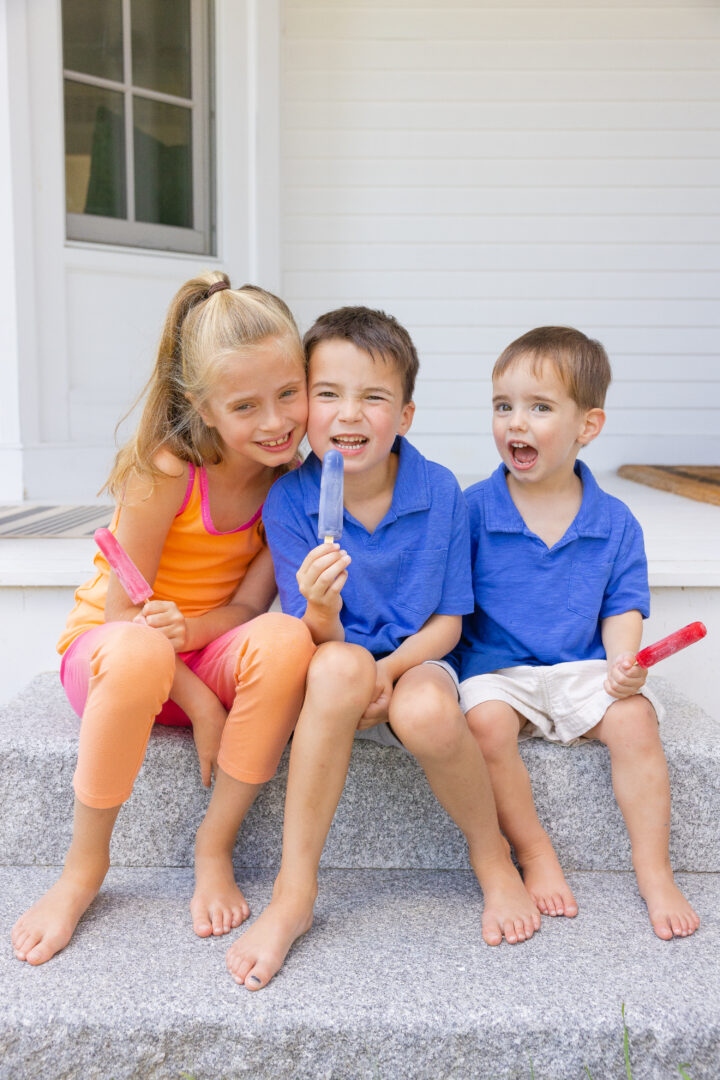 One of the most fascinating aspects of having three children has been observing the ever-changing sibling dynamics at play. When I had two children, a boy, and a girl, I felt as though the dynamic was pretty much as classic as it gets. I wrote a bit about the changing dynamics between two children in this blog post that explored Marlowe and Major’s relationship as Major emerged out of babyhood and into toddlerhood. The biggest takeaway for me with two children is that there was one alpha, and one beta, and as dynamics shifted, there was always a struggle between the roles based on birth order and the roles based on personality. We assumed that Major was more of an introvert at first because his sister was completely overtaking him and calling the shots! However, as he grew into his own and developed a stronger voice, it was interesting to watch my two Bigs grow into more of a peer relationship. Especially when they started sharing a room! 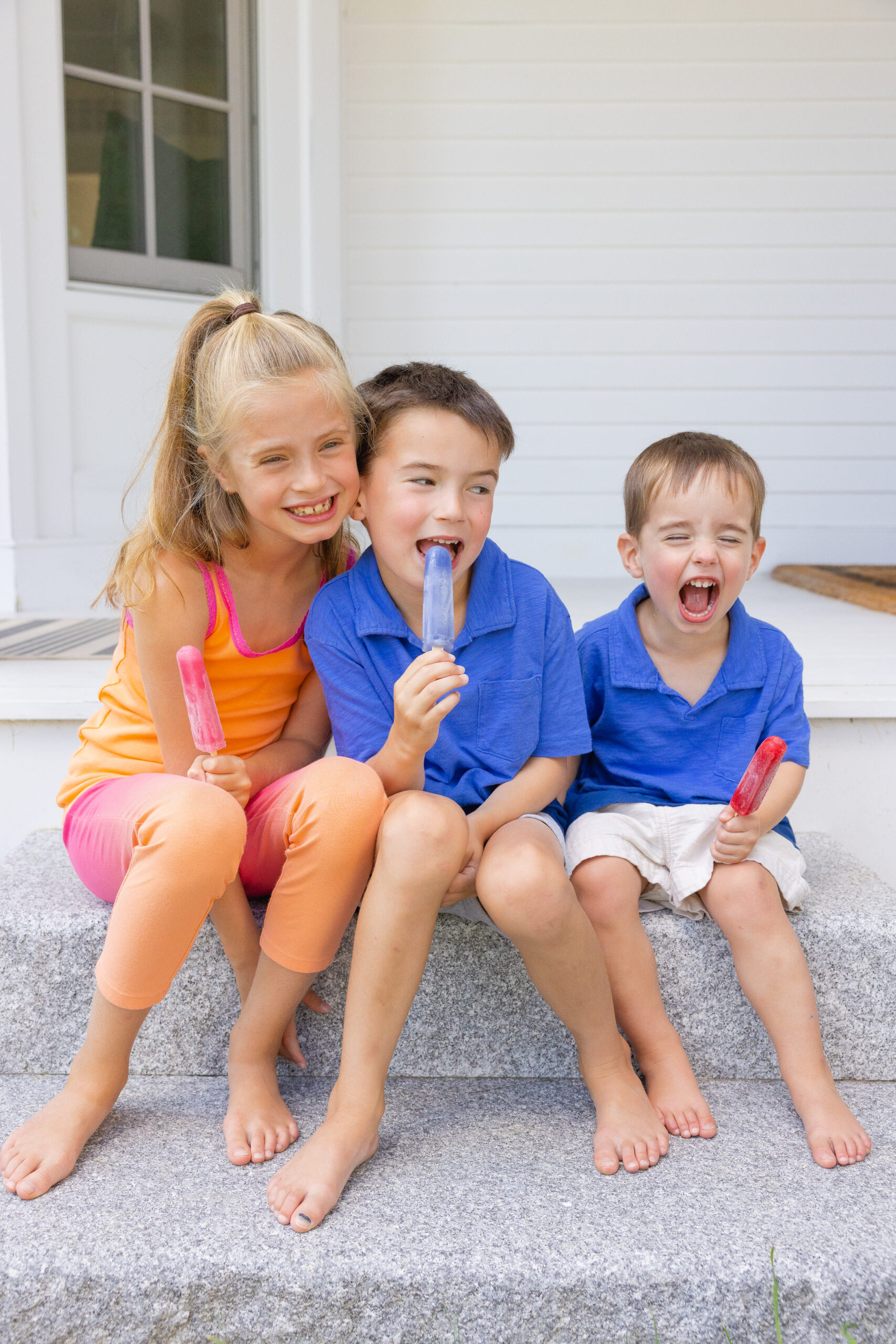 But back to the dynamic of 3. I have a very blended family of SIX younger siblings. Yes, you read that right. We didn’t all grow up in a house together, but big families are great for teaching you the impermanence of sibling dynamics. Siblings can relate in one certain kind of way for one season of life, and then the dynamics totally shift. This happens especially acutely when a new child is welcomed into the family. When Mateo was born, Marlowe was five, and Major was three. They were already sharing a room, and we had begun to refer to them as The Bigs…aka the Twins. Even though Marlowe and Major have their own individual interests and a two-year age gap, they truly do operate like twins who expect to do everything as a pair. I was really interested to see how the dynamics would change and shift with a third sibling!

I spoke a bit about what it was like adjusting to life with three kids in the beginning in this blog post about going from two to three kids. Now, over two years later, I figured I was due for a bit of an update! It’s wild how different the family dynamic has become with three kids! Some of my major takeaways are below. I’d love to hear from you guys if you have experience with this as well. 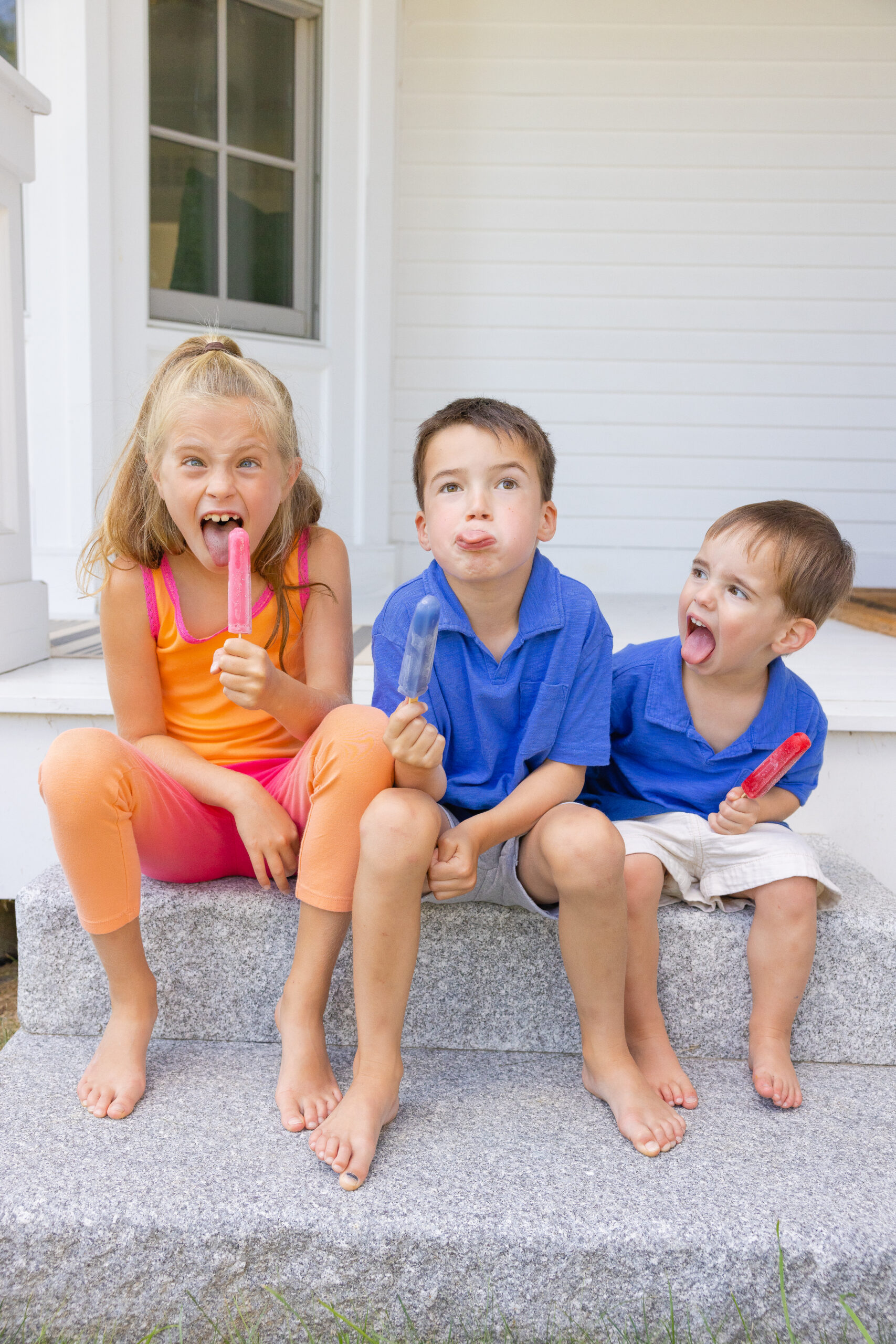 A DISTANCE BETWEEN THE BIGS

As soon as Mateo was born, Marlowe essentially dropped Major like a hot potato. She had a new baby to boss around and was all of a sudden the head honcho again with a new member of the family. It was tough to watch as a parent, but in a way, it gave Major some space that he was craving at the time and allowed him to adjust to the baby a bit easier. Marlowe is very easily affected emotionally when Major doesn’t want to follow her lead or play the game she wants to play, and I noticed that having another sibling who was always up for a hang really softened the blow for her. Major was pretty disinterested in Mateo at first, and he ended up playing more independently during the first year or so, which really strengthened his self-confidence. By the time Mateo was a toddler with strong opinions, The Bigs were ready to come back together and have their big kid time without their baby brother.

Now that Mateo is older and an active participant in playtime, I notice that there is almost always one kid who is the odd one out. There are usually 2 of the 3 who want to play a certain game or go to a certain place, and then one who wants something else. It’s definitely a challenge to navigate as a parent, but I try to stay out of it as much as I can and let them work it out. I think it’s a good life lesson to learn compromise and to understand that a group mentality isn’t always going to go your way.

I was telling Ian this past weekend that a huge shift I noticed when we added a third child to the mix was active attention-seeking from the kids. I think before when there was technically one adult for each child, the kids didn’t feel as much that they needed to battle for attention when we are all together. Now, there is a totally different energy, especially since all three kids are extremely outgoing personalities who like to get a word in. I notice that when all three parents (Me, Ian, and Kyle) are together with the three kids, this lessens a lot. The kids tend to each gravitate towards one of us as a touchstone. When I’m alone with the three it’s even worse, obviously, and it takes a lot of patience to navigate it.

One of the best parts of the sibling dynamic with three kids is the fact that the kids can now play independently in a group, without a parent having to interfere. They all will look out for each other, and they can (mostly) get through any disagreements or road bumps on their own. They can also play more complex make-believe games, and it’s so fun and funny to overhear what they come up with! It’s nice to have built-in playmates within our own home!

It’s really nice to have the big kids at an age where they want to model kind, loving, and constructive behavior for Mateo. Both Marlowe and Major enjoy “teaching” Mateo new things and helping him with learning milestones. I can tell that it gives them self-confidence as much as it gives Mateo comfort to have his siblings’ support.

A recent realization I’ve had is that in a family with multiple kids, the general mood among them seems to descend to the lowest common denominator. If one kid is having an off day and whining, then within an hour the other ones end up following suit. Even if they were fine before! It’s taught me that when one child is having an off day, it’s worth the time and energy investment to help that child process whatever is going on before rejoining the group. Everyone’s day is a little better that way!

BEAUTY IN THE CHAOS

With three kids, there is absolutely ALWAYS a little bit of chaos. It’s so funny, though, watching these three personalities interact, and they’re all so sweet and silly with each other the majority of the time. I’m so grateful that they’ll have each other to walk through life with and that they are each so different. I remind myself often that these growing-up years are the years when they’re cementing their bonds and their relationships with each other and I try to honor that and encourage that as much as I can. I can’t wait to see what the future holds with these three! 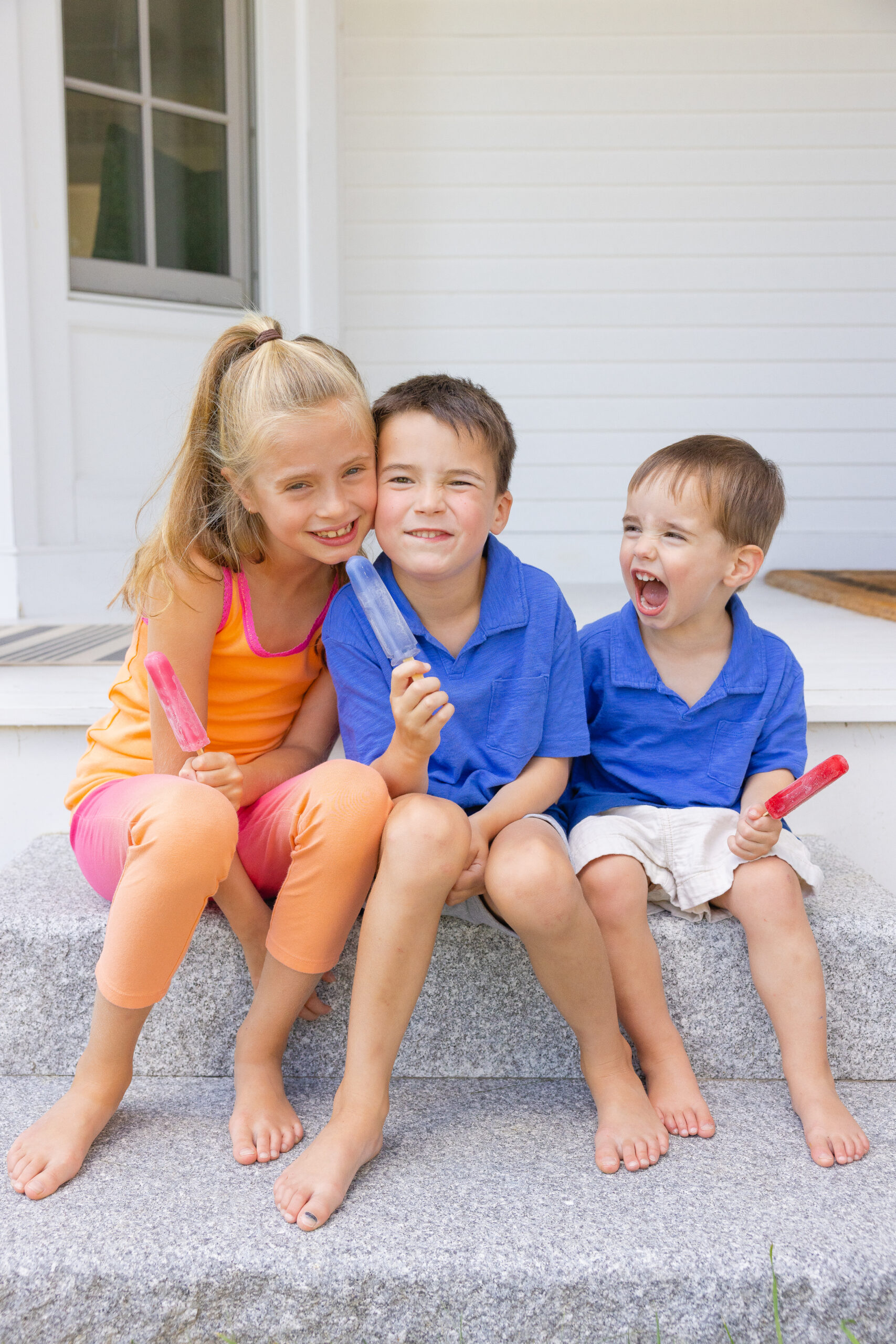 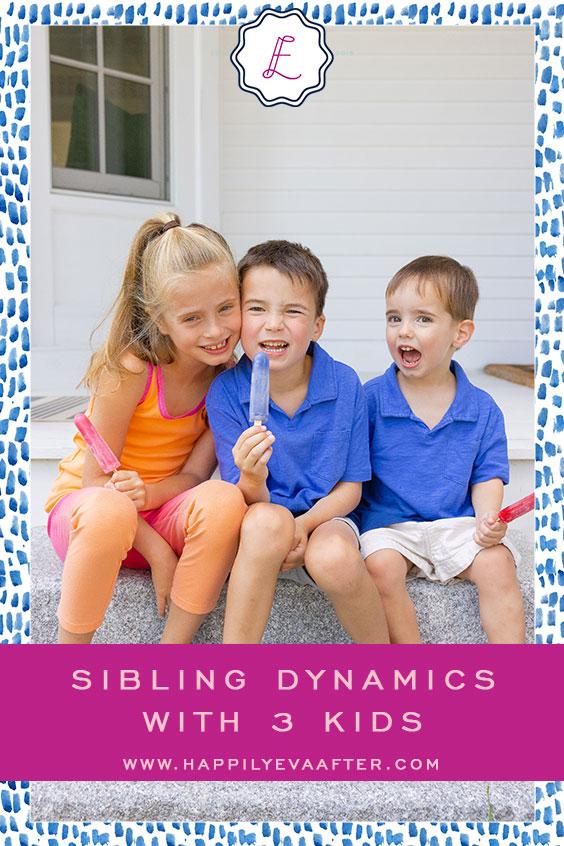 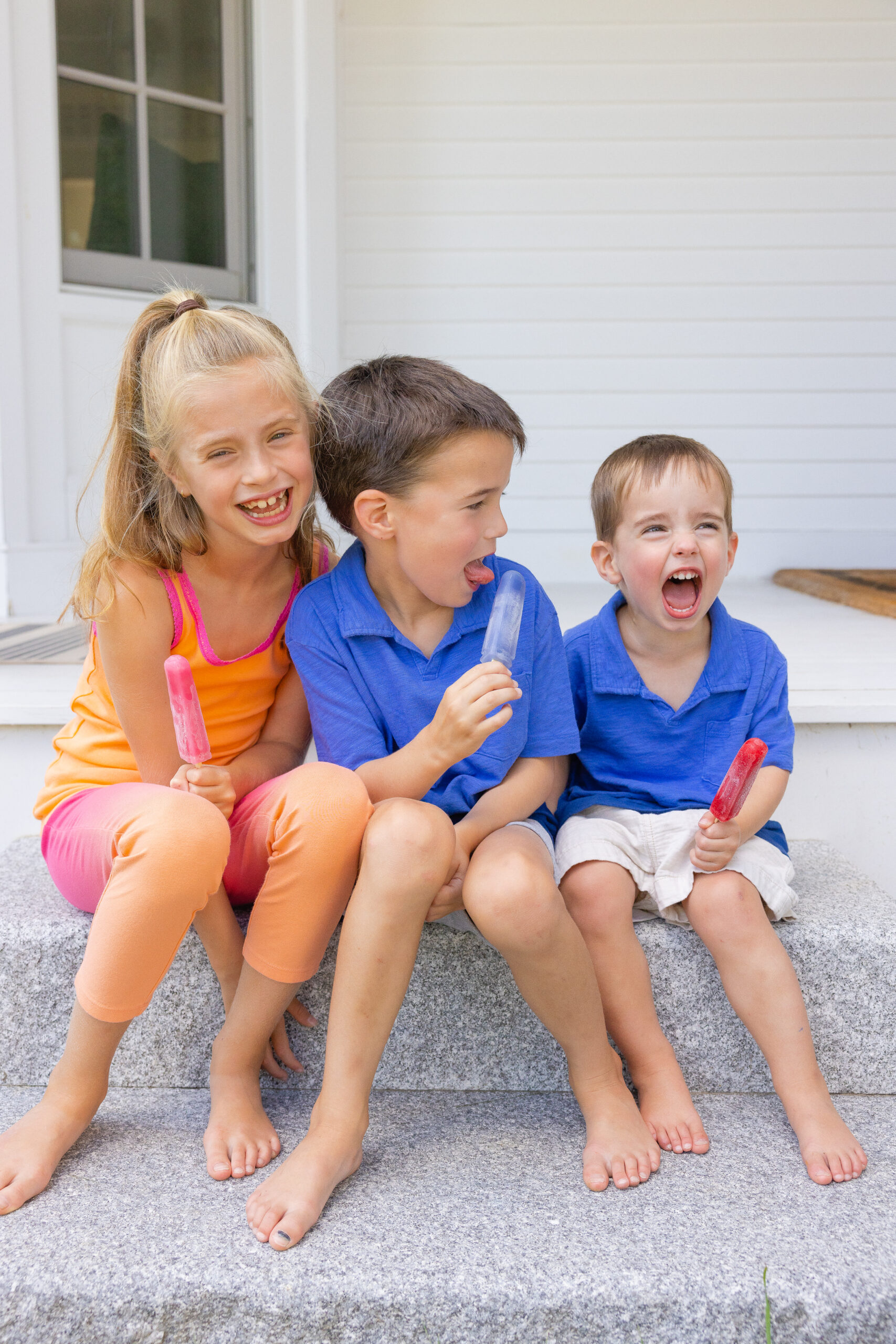