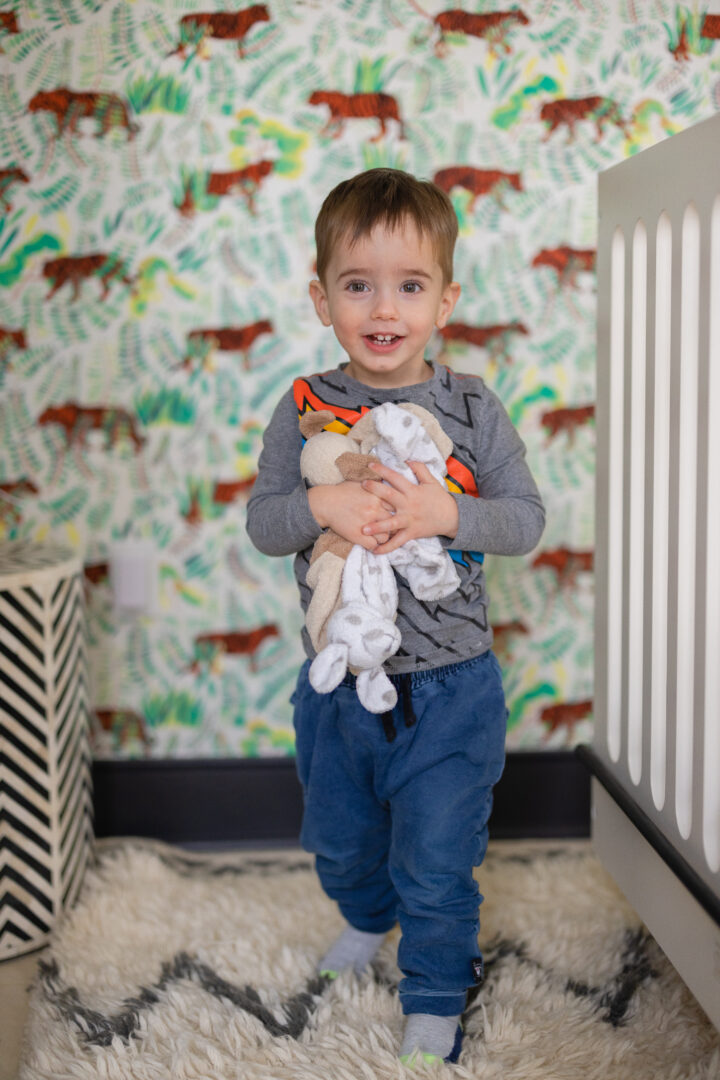 My littlest love is turning TWO this weekend and boy is it a trip. I can’t believe it. On one hand, it feels like Mateo is five already, and on the other hand, the pandemic has made the last couple of years such a blur that it doesn’t even seem like two years have gone by. Our life with our toddler has been so different from our last Toddler Update, though, that I realized I had to do a new one! Mateo is such a big boy, and growing and changing at rates that far surpass his siblings. I’ve been told this is pretty typical for third children, as they see the kids before them set a higher bar, but truthfully, I’m shocked. In a lot of ways, it feels like we skipped the early toddler phase and went right to the big kid phase! Today I thought I’d share a bit about what life has been like lately, as well as some products that we (and he!) are loving. 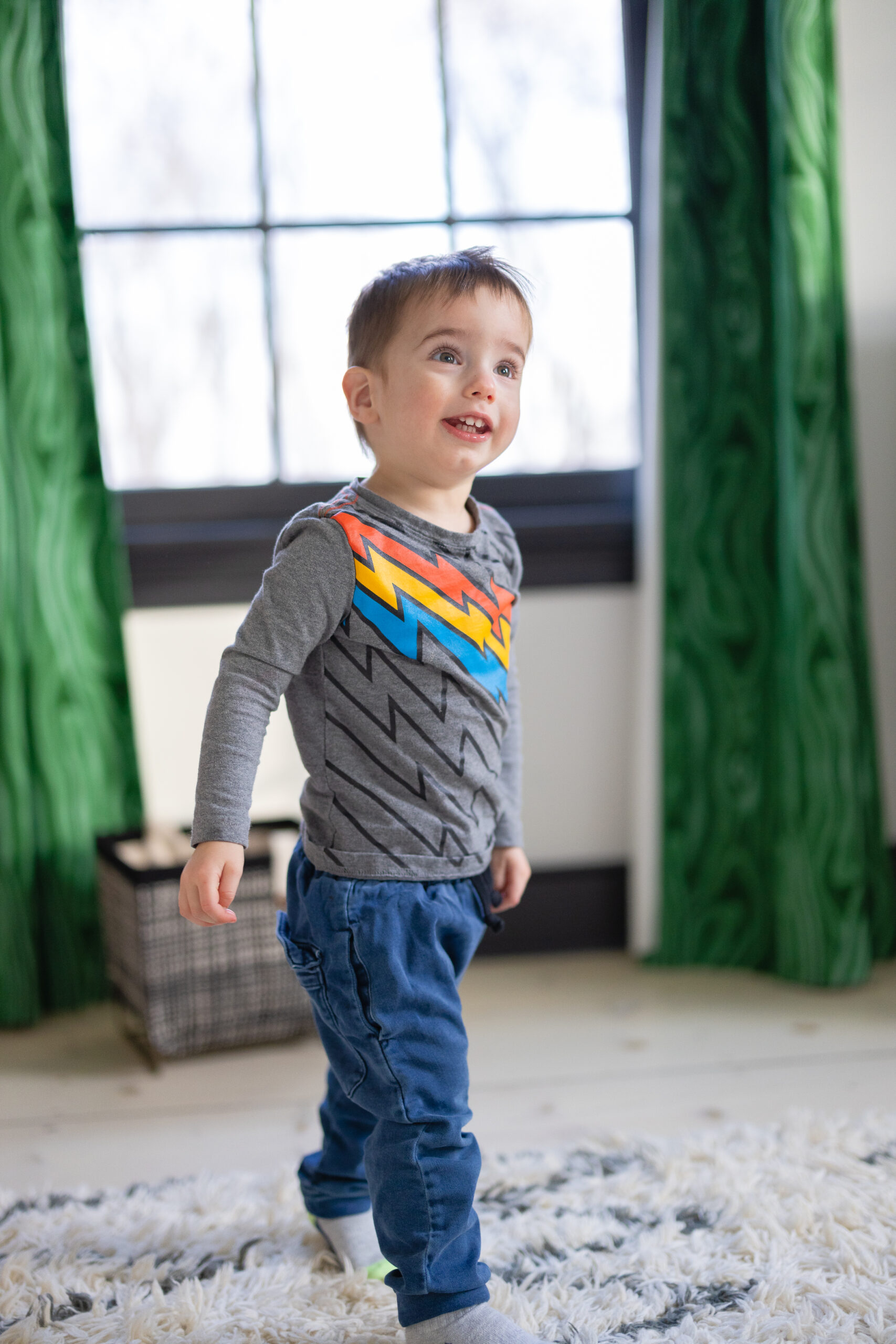 I shared in my last toddler update that Mateo really doesn’t understand that he isn’t the same age as his older sibs, and it turns out there hasn’t been a reality check. LOL. He absolutely refuses to be treated differently or to modify activities whatsoever. In some ways, this has been really challenging, as he’s tried to run up and down the stairs, or jump down off of things, and gotten hurt. Thankfully, I’m a third-time Mom and so bumps and bruises or scrapes don’t rattle me as much as they used to. And, on the positive side, he’s very quickly developed a lot of those gross motor skills that took my older kids longer to develop. What can I say, he’s a learn-on-the-job kinda guy! Ha! 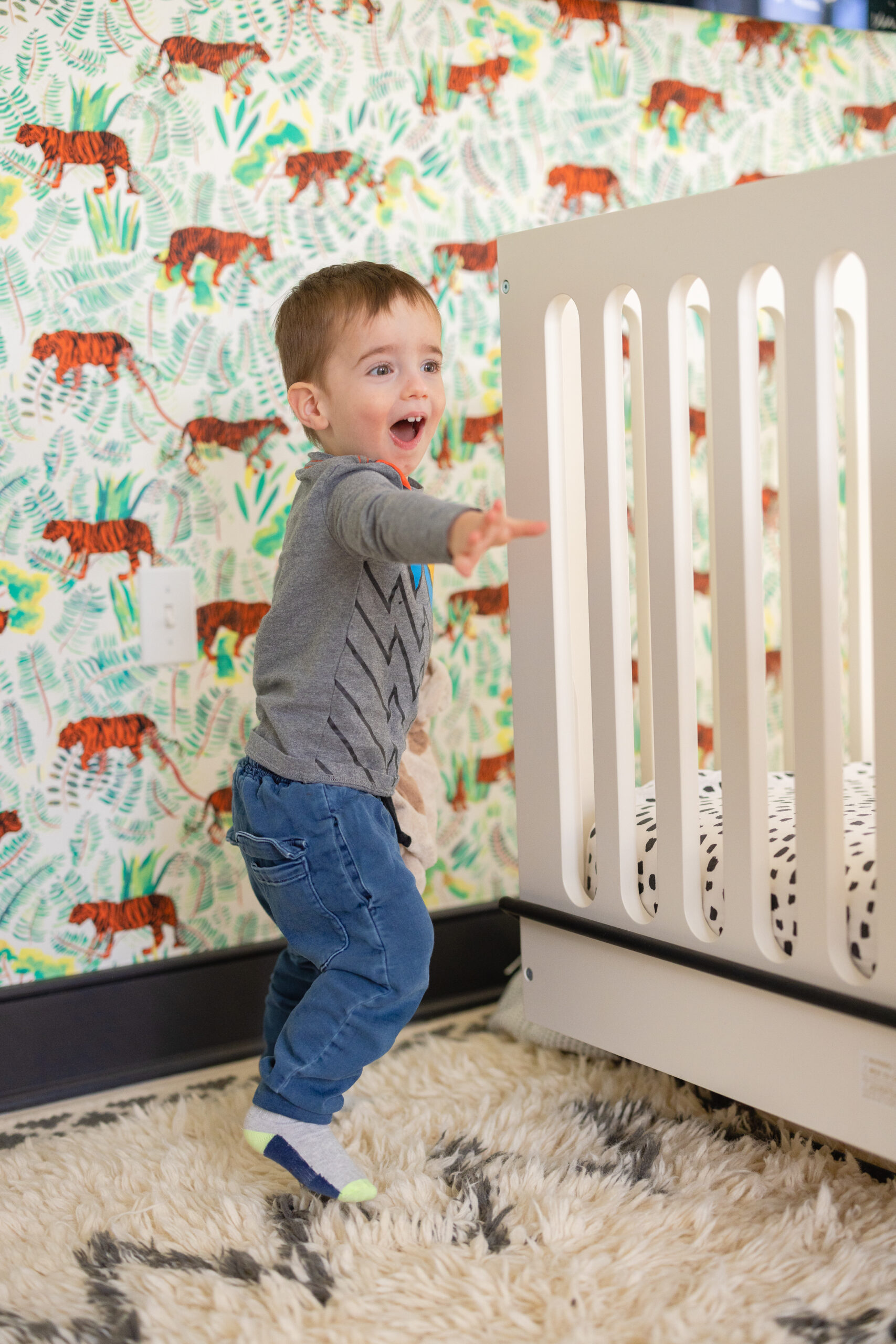 Mateo is my most verbal child by a mile. While Marlowe and Major weren’t delayed milestone-wise (and they had a good grasp of vocabulary at a younger age) I’ve noticed that Mateo has a much more solid grasp of language (tenses, vocab, bigger concept) than either of them did at 20-24 months. I’ve heard this is also a third child thing! But sometimes the things that come out of his mouth actually shock me. We were playing cars the other day, and one of his cars fell off of the track. He shook his head in disappointment and then muttered “Ugh. Come on, Dude!” I made him repeat it. It’s made me remember what a sponge they are at this age, and that I need to be super intentional about the way I speak to him and the types of questions I’m asking to help him grow his mastery of language. I also have to be careful not to say anything around him that I don’t want to be repeated. LOL.

Of all my children, Mateo is definitely my most curious. He not only wants to really watch processes happening around him, but he wants to master them. His attention to detail is at times unnerving. And his memory! He’ll remember exactly what somebody said earlier in the day, and off-hand comments people make and repeat them later that night. He’s also memorized a few of our family recipes from watching Ian cook them so much. He can actually make pancakes from start to finish. It’s bananas. I love watching him discover the world, learn new things, and try his best to master them.

Here’s the downside to having a toddler who is super curious, feels older than he is, but is still..ummm.. A BABY: you get a total disconnect between where he thinks he’s at, and where he’s actually at emotionally, physically, and otherwise. And this leads to a ton of frustration. Hourly, daily, and basically all of life lately. It can be exhausting. Scratch that: it IS totally, completely exhausting. For the whole family. Mateo is my child most prone to outbursts. If something doesn’t go how he envisioned it, or if I’m not understanding exactly what he’s trying to communicate, or if the wind blows a certain way– he will have the most atomic meltdown known to man. And it’s not just crying. It’s storming around the house, pushing things over off of tables, yelling at me (“I’m so mad at YOU! No like you Mama! I want a new one! Never kiss me AGAIN!”). As a Mom, I really walk a fine line between trying not to walk on eggshells around him or give into things just to make sure there’s not a meltdown and doing things that need to be done for his own safety, or for the general good of the family as a whole. The whole house can’t operate on Mateo time. It’s a tough balance to strike, especially as a mom who hasn’t dealt with this level of tantrums before. Thankfully, the tactics I’ve used in the past still work to calm him down…but I can’t evade tantrums as intentionally as I was able to with my other kids. Sometimes it feels like they come out of nowhere. I know it’s completely normal for this age, but that’s definitely something we are all working through with this third kiddo of ours! 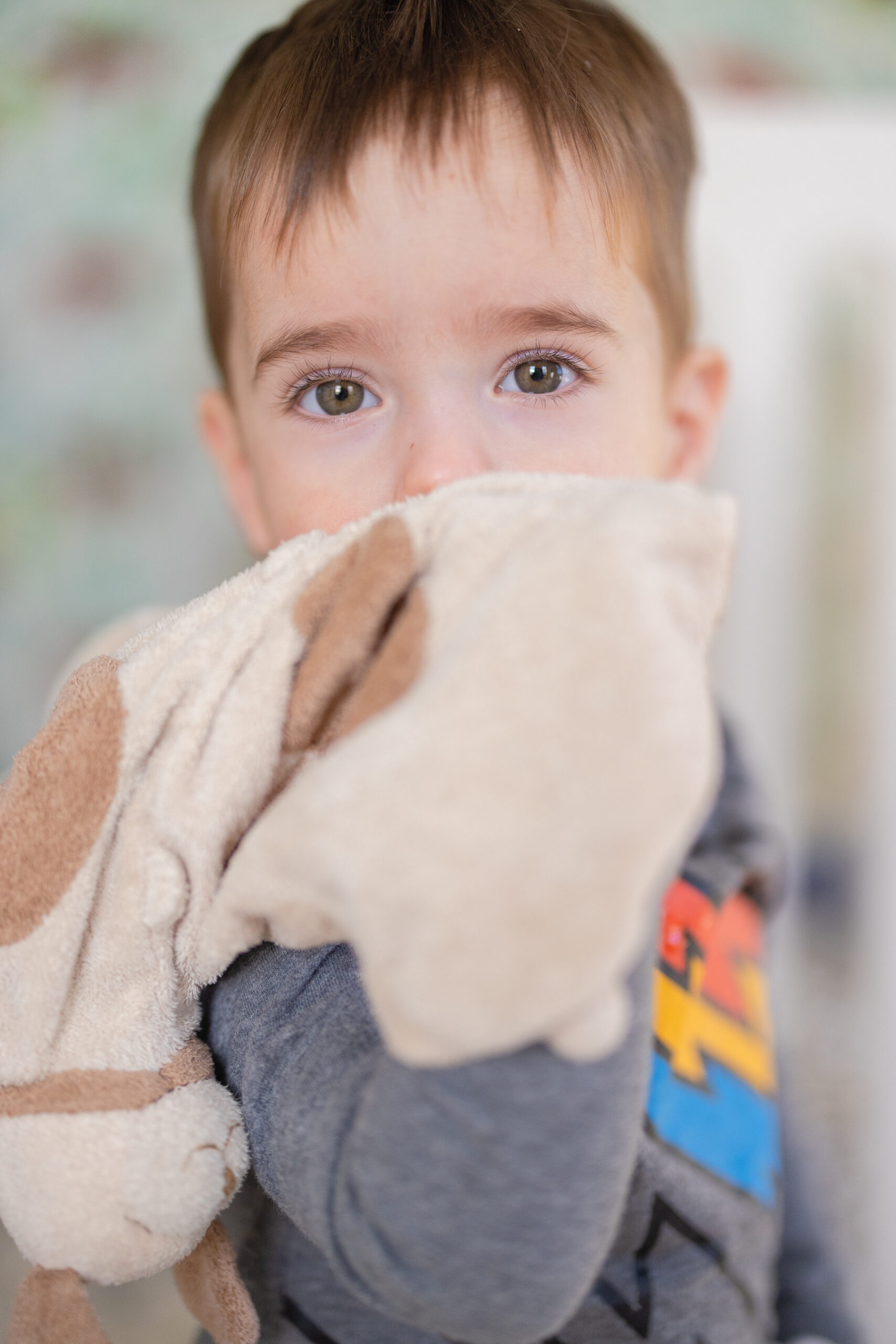 One of my biggest fears with Mateo as a Pandemic Baby was that he wouldn’t be socialized normally and would have problems making friends. With him, it’s been the opposite. He’s so outgoing and has a great little friend group going at the library and children’s museum. I love watching him share and play nicely with others (which is ironic because he will fight tooth and nail over toys with his siblings, go figure). He also has shown such an affinity for animals! He plays more with our family guinea pig than anybody else in the house and is always so sweet and gentle with him. Sometimes it feels counterintuitive because of what a wrecking ball he can be when he’s angry, but it does give me peace of mind that we’ll sort through the tantrums of it all. In other news, Marlowe is still his favorite member of the family. He goes immediately to her when he’s hurt or upset, even before he goes to Me, Kyle, or Ian! It’s so sweet to see that their close bond is still so strong. 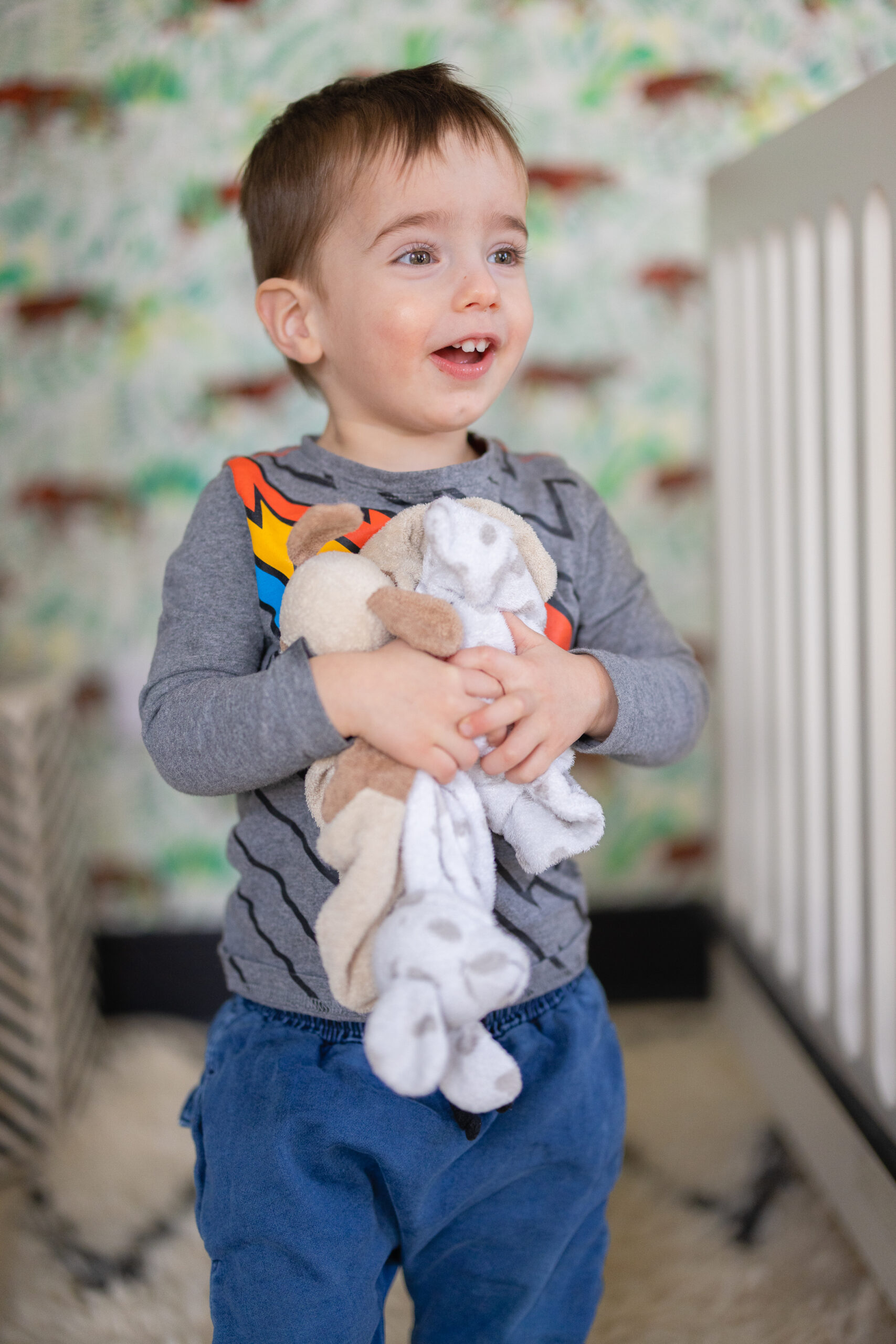 ONLY SNUGGLY AT NIGHT

Major is my warm and fuzzy snuggler, and Mateo is my guy who likes his independence…until bedtime. Then, he’ll let me snuggle and sing to him, and soak in that baby goodness that I always miss out on when he’s zooming all over the world during the day. Then he’ll sit up in my arms and say “I want my bed now” and when I put him in there, cover him with a blanket, and hand him a lovey, and say “I love you” I always get the sweetest “Love you too, Mama. Sweet dreams”. And then I melt and die. 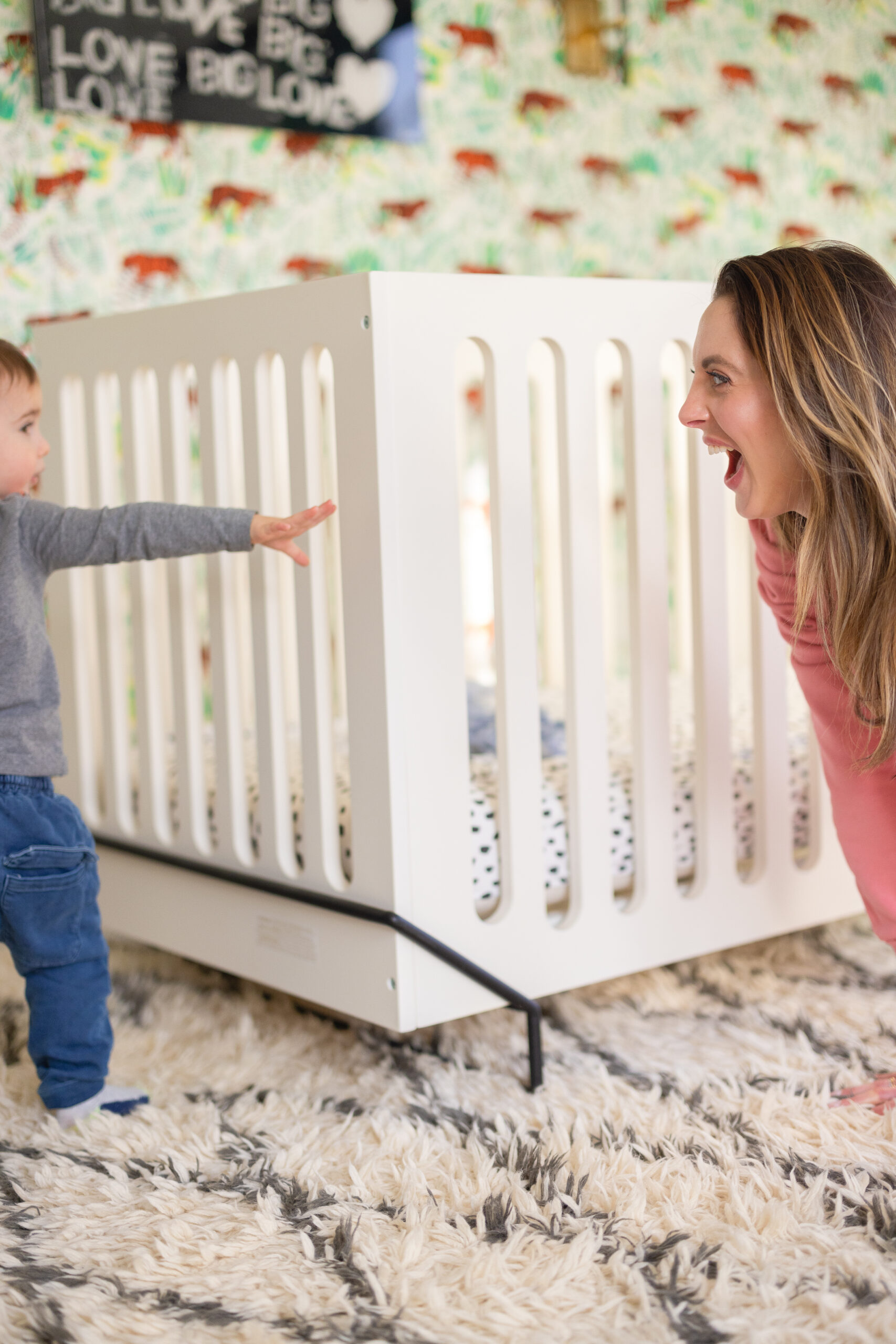 Mateo is still loving all things vehicles…and he’ll play with our train table for hours straight! He’s also recently been really interested in playing make-believe with the play kitchen, and it’s been fun to hear his recipes. In terms of TV, the shows he likes are Coco Melon, Bluey, Blippi, and Brain Candy. Brain candy (Prime Video) is one we love, too, because it’s super educational. He learned all his colors and his numbers up to 20 from watching that show! 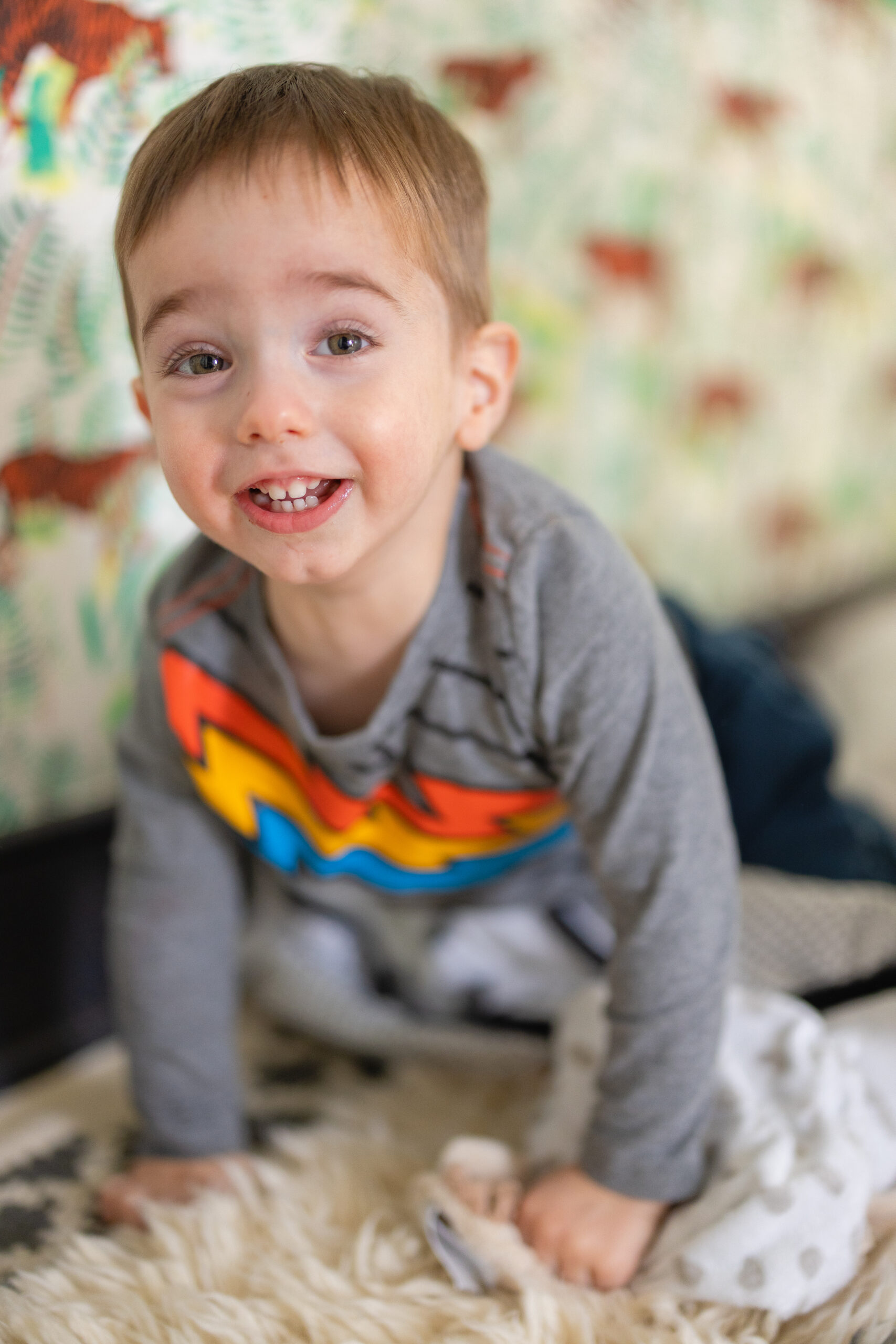 Unfortunately, about a month ago, Mateo learned how to climb out of his crib. I even tried putting his sleep sack backward, but whether he’s wearing a sleep sack or not, he can now lift himself up and over the crib. It’s the worst. For a super active and determined kid like him, I actually get pretty scared about him roaming the house at night, or attempting things he shouldn’t. And while I don’t love the idea of locking him in his room, it was something we really considered before we did some crib training with him. Luckily we didn’t have to lock him in! It took two weeks of really deliberate training, but now he is staying in his bed until 7 am! We just used the toddler alarm clocked (I’ve mentioned it before in Major’s transitioning to a big boy bedpost), and we made a point of explaining ad nauseum that he has to stay in there until the green light is on. Then, he can come out and get us. We had a solid week of bringing him back to his bed about 20 times within an hour (and lots of speaking to him via the baby monitor’s talk feature) but he’s finally settled into our new normal boundaries, and I’m not as worried anymore. Hopefully, it will make his transition to a big kid bed smoother when that eventually happens, since we’ve already been doing some training. 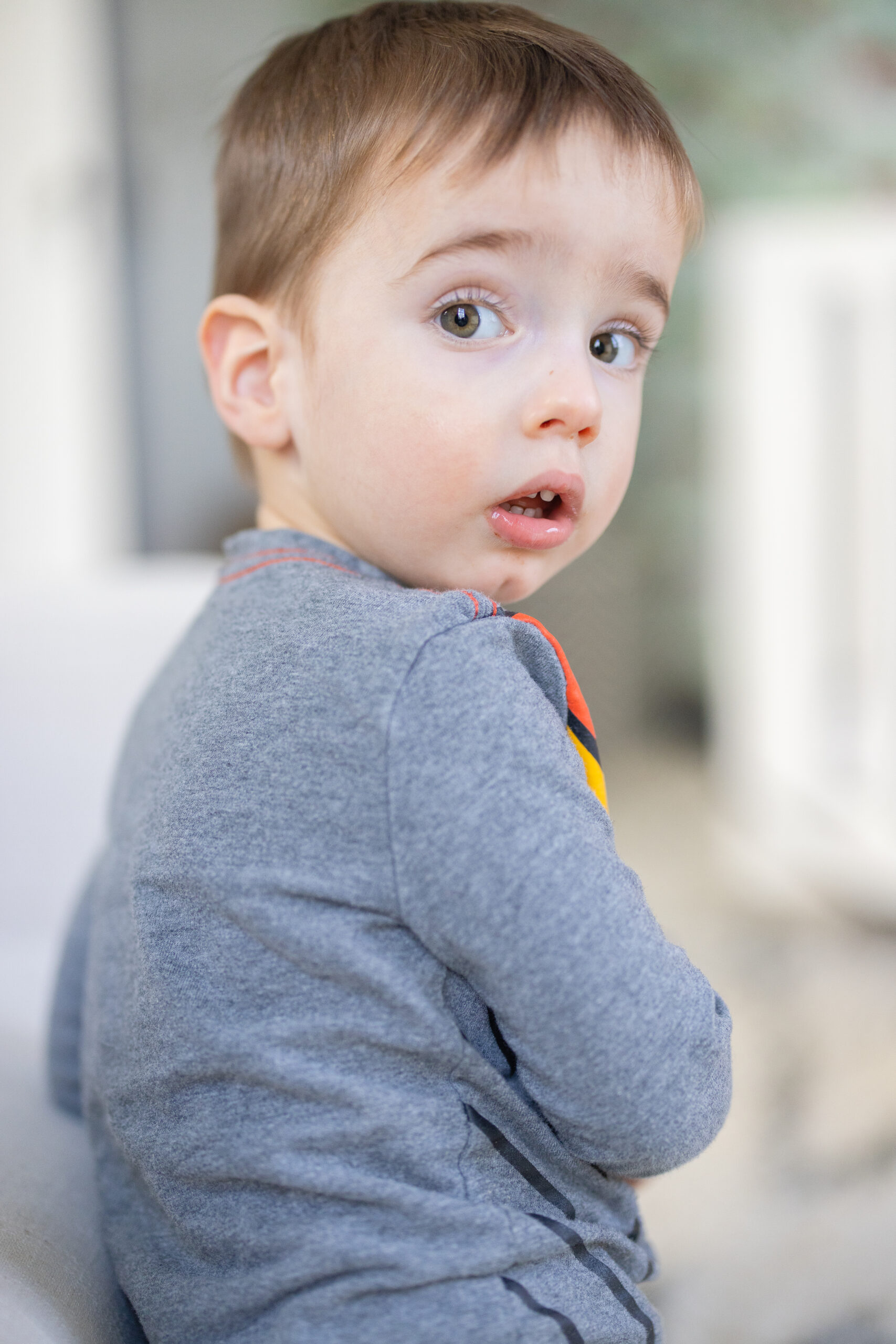 One of my greatest joys of the last year has been watching Mateo come into his personality so strongly, and to realize what a hilarious kid he is. The little jokes he makes, the way he can find his way into any conversation, and his overall goofiness never cease to bring a smile to my face. As sad as it is to think about the baby years being over, I really can’t wait to see what he’s like as a bigger kid, too! I know we are in for a lot of really fun dinners sitting around the table altogether.

This is the chair that Mateo sits at for breakfast and lunch. It attaches to our marble countertop, and gives him prime viewing of the whole kitchen so he can be a part of the action!

This is the booster seat I use for him when we eat dinner in the dining room every night. It’s held up through all three kids! I love it!

These are the loveys he uses at night. My other kids use them too, but they have different characters.

This train table was a hand-me-down but this is the most similar. Both my boys love it!

These are the utensils Mateo uses. They’re so cute.

I still use these Tubby Todd products on Mateo’s sensitive skin and love them.

Mr. Independent loves putting his own shoes on, and these Hunter boots make it so easy for him.

Mateo loves making art, and these markers seem to be his faves!

Mateo is super duper into building things, and I love Magnatiles because they’re attractive to look at, and they click together so he doesn’t get frustrated.

I just got this for Mateo’s birthday gift! I know my guy who loves being “on level” with everyone else in the family will flip for this. I can’t wait to give it to him! 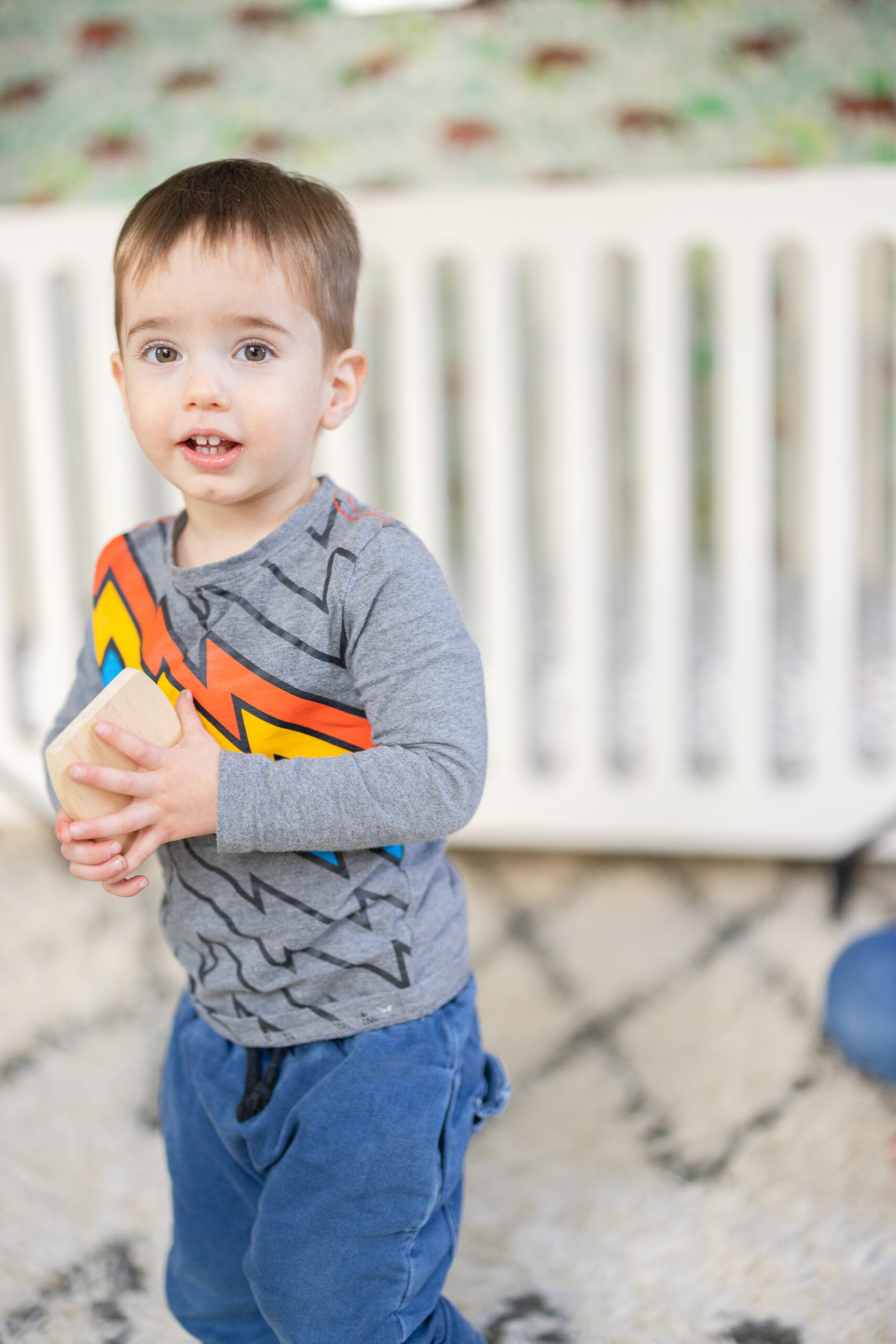 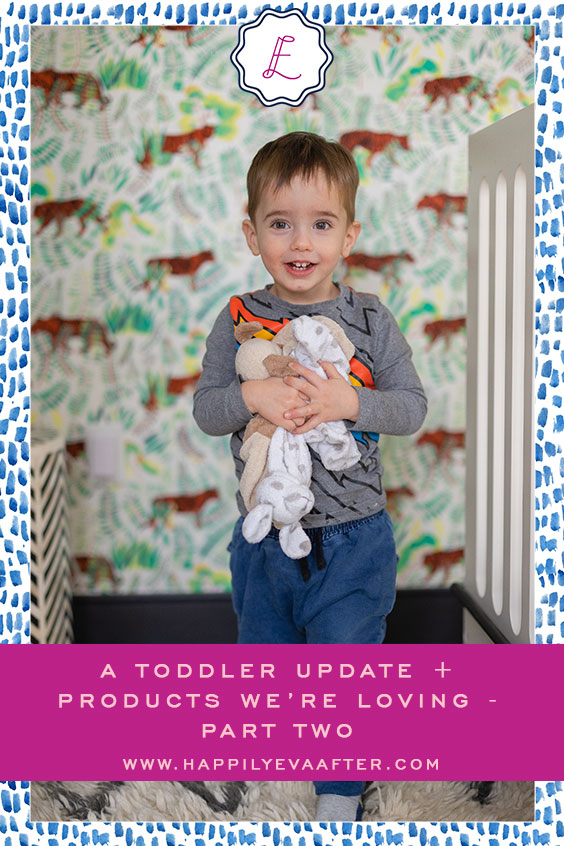 Happily Eva Answers: Putting The “Me” Back In Mommy