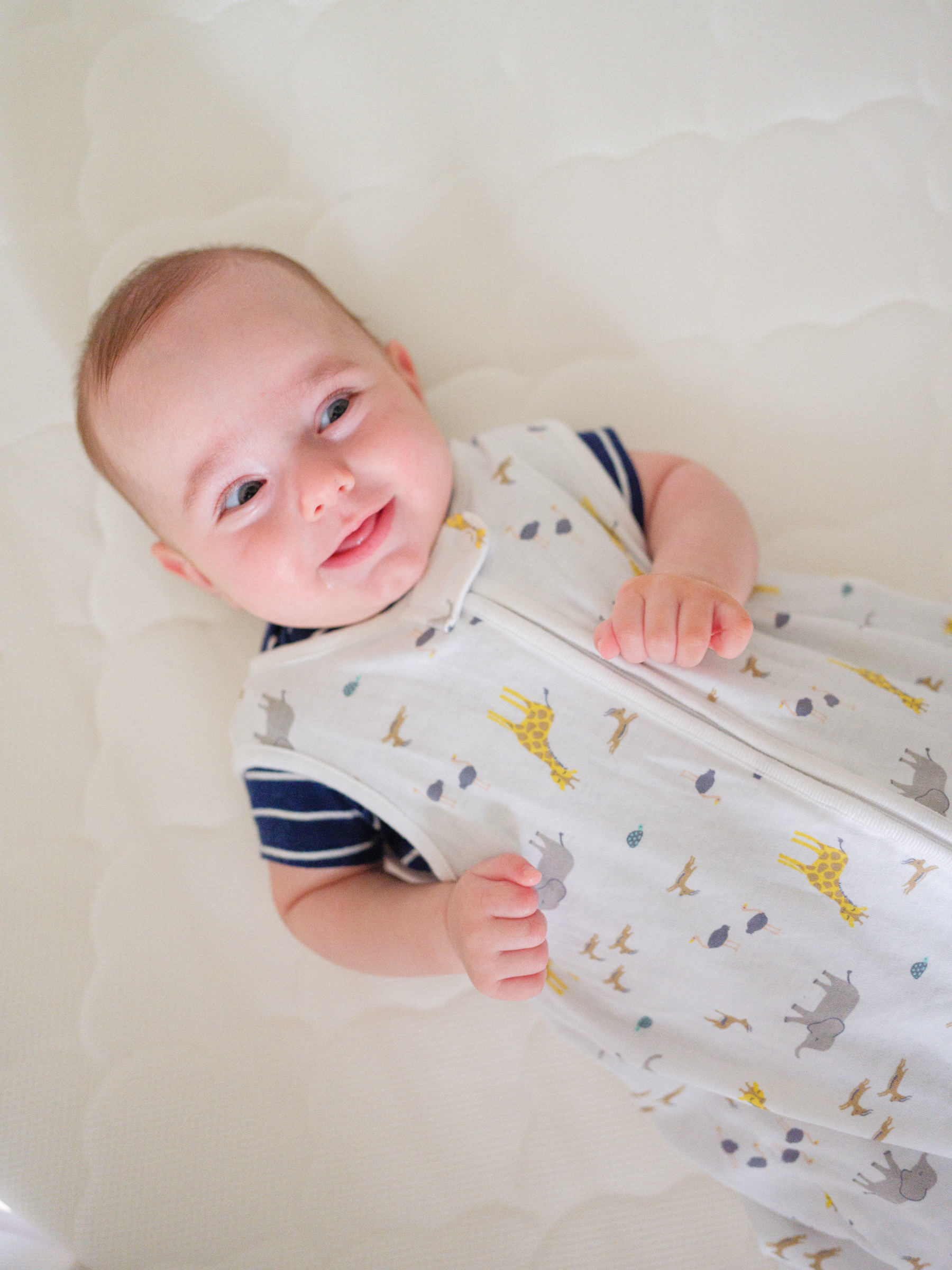 As anybody with an infant can tell you, there is ALWAYS something that first year of life! Just when you think you’re on a roll – a hiccup, milestone, or hurdle appears that throws it all out of whack and keeps you on your toes (and waist deep in coffee).

At three months old, Mateo suddenly rolled over for the first time (back to front), and my perfect sleeper was decidedly not so perfect anymore. Fantastic! LOL. It’s been my first big hurdle to cross with him (though not my first rodeo with this, obviously) so I decided to share a bit about what it was like to transition him from a swaddle and what got us through the tricky couple of weeks that followed! 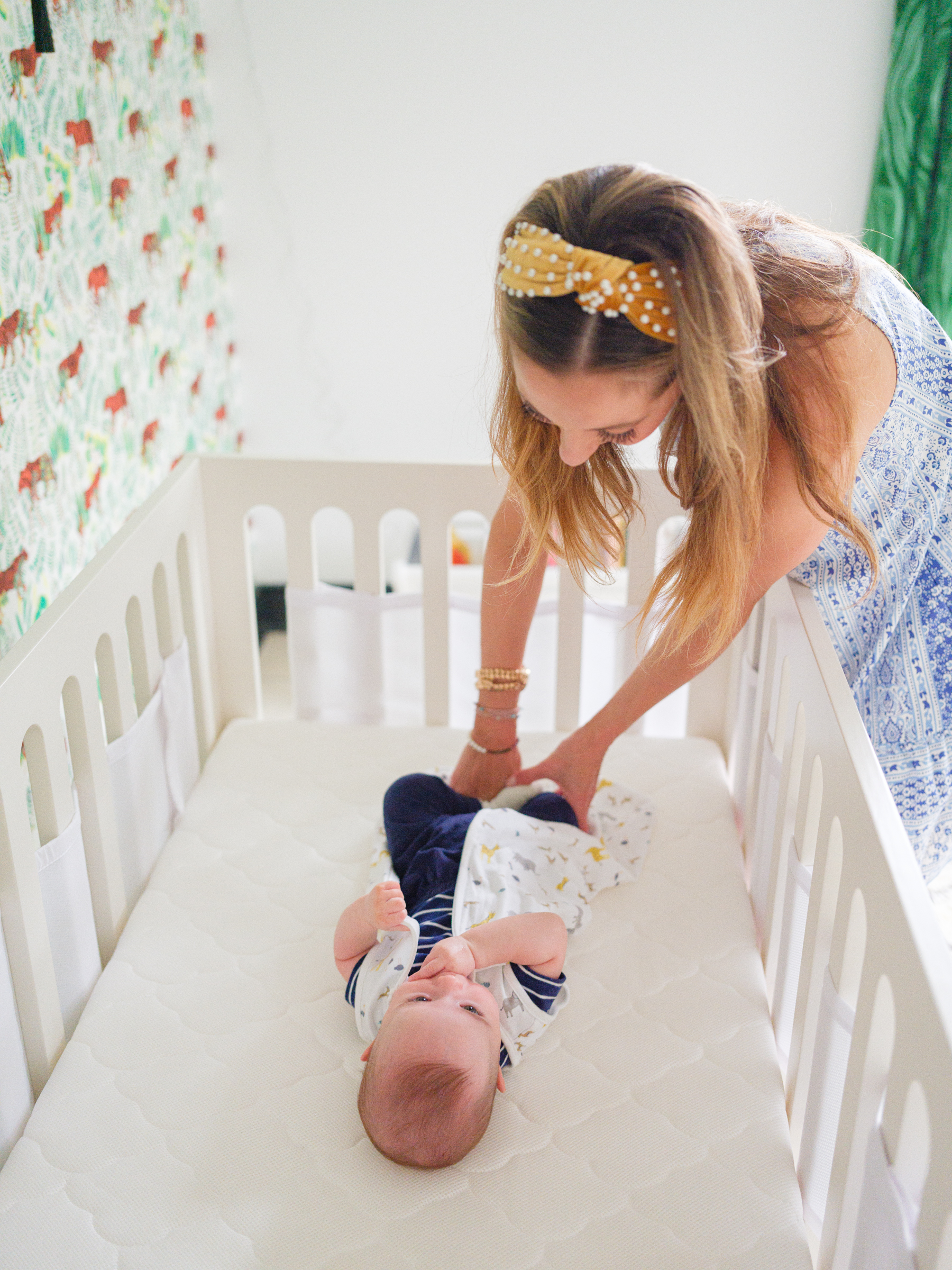 To start, a little on rolling: A quick google can tell you that babies can roll over from front to back (easier) anywhere as early as 2-3 months and typically are rolling over from back to front around 5-6 months. Of course as with any milestone, these are average and not universal! Always check with your pediatrician if you’re concerned. You can read my experience with Milestones here.

So, we all have our babies sleeping on their backs these days for SIDS purposes (greatly reduces the risk of SIDS) and many people swaddle their babies for comfort and better sleep, because of the newborn startle reflex.  The startle reflex is what we see when cute little newborns all of a sudden startle while sleeping and usually wake themselves up.  I’ve had great success swaddling my kiddos – but as every pediatrician tells you, the MINUTE your kid rolls over for the first time that swaddle is over too. It’s just too risky. If a baby rolls over accidentally with their hands swaddled to their body it’s really unsafe because suffocation in the mattress can occur. 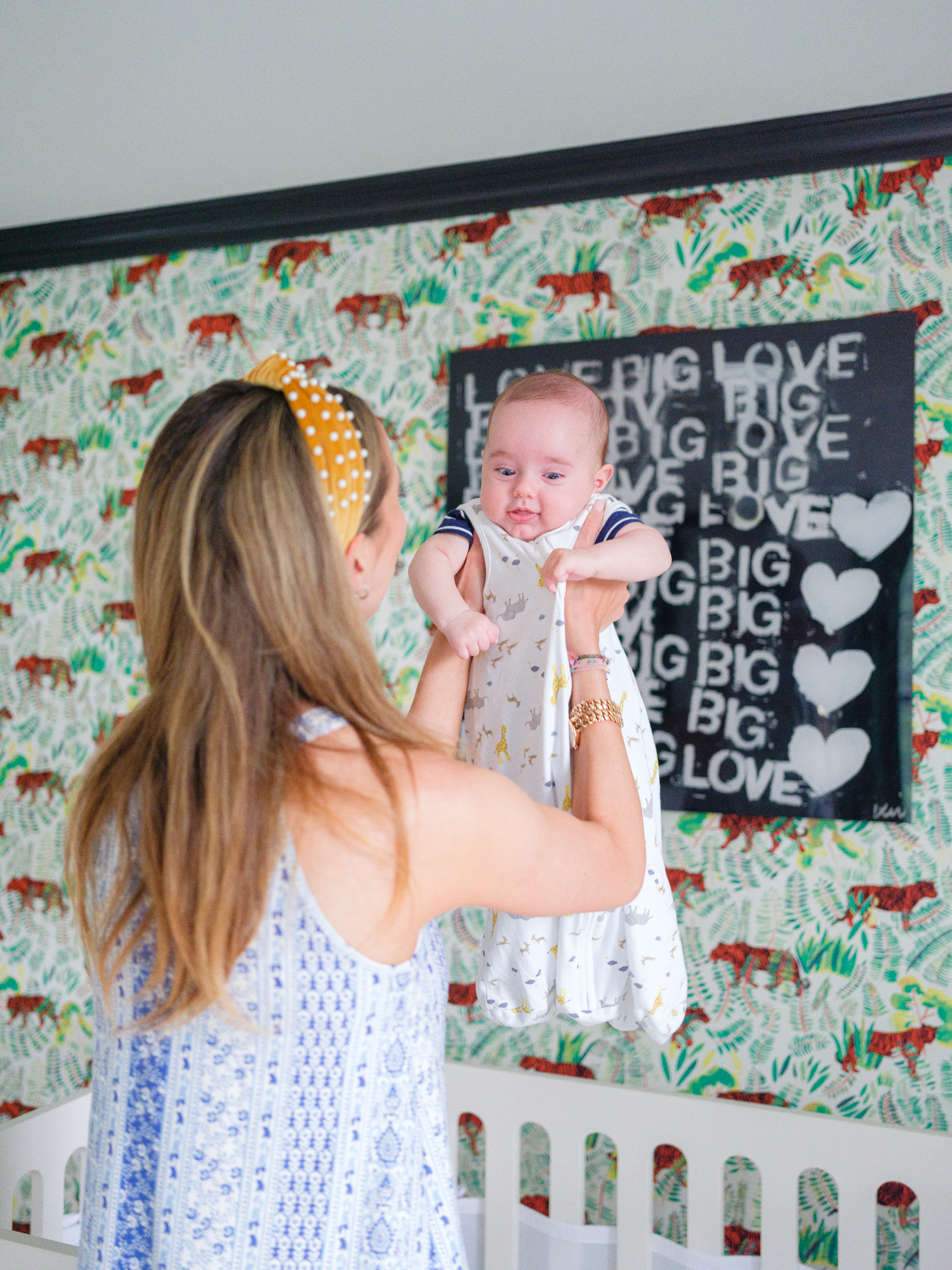 Suffocation makes me super anxious as a Mama (I mean, duh, right?) But in particular, that idea of my baby rolling over in a swaddle in the middle of the night for the first time, being asleep and not noticing, and something tragic happening. As a result, I always keep my eyes peeled for my baby’s first roll!

Major rolled over for the first time from back to front at two months old. Yep. TWO MONTHS. I had to pull the swaddle super early for him too, and tried out bunch of different contraptions meant to transition a baby between the swaddle and sleep sack.

We ended up using the Zippadee-Zip for him for about a month, but truthfully I was so nervous about him rolling over at such a young age that I brought him in to bed with us most nights in a DockATot. His startle reflex dissipated at about 3 months and I put him in a sleep sack and then had to sleep train him again to get him used to not sleeping in bed with us. It was all around NOT fun.

We used this with Major for about a month.

Then I co-slept with Major in this DockATot.

Since Mateo rolled over from back to front a bit later (albeit early in the grand scheme) I was a little less anxious. His startle reflex was mostly gone already, and the big hurdle was going to be getting him accustomed to sleeping in a sleep sack with his arms out instead of in.  Or so I thought.  Ha!

The first time Mateo rolled over in his crib, it was early one morning about an hour before he normally wakes up.  I heard him fussing on the monitor, and the way his voice was just sounded weird and muffled. I grabbed the monitor and he was ON HIS STOMACH in the swaddle. I don’t think I’ve ever flown down a hallway so fast. Once I caught my breath, I was extra thankful for the Newton Baby mattress I have in his crib. It’s made without chemicals, and the mattress core and cover are both totally breathable which reduces the risk of suffocation by a lot. It has truly been such a sleep saver for ME just knowing there is that extra layer of security for Mateo should he ever roll to tummy and put his face down.

This is the crib mattress Mateo uses and I LOVE IT! 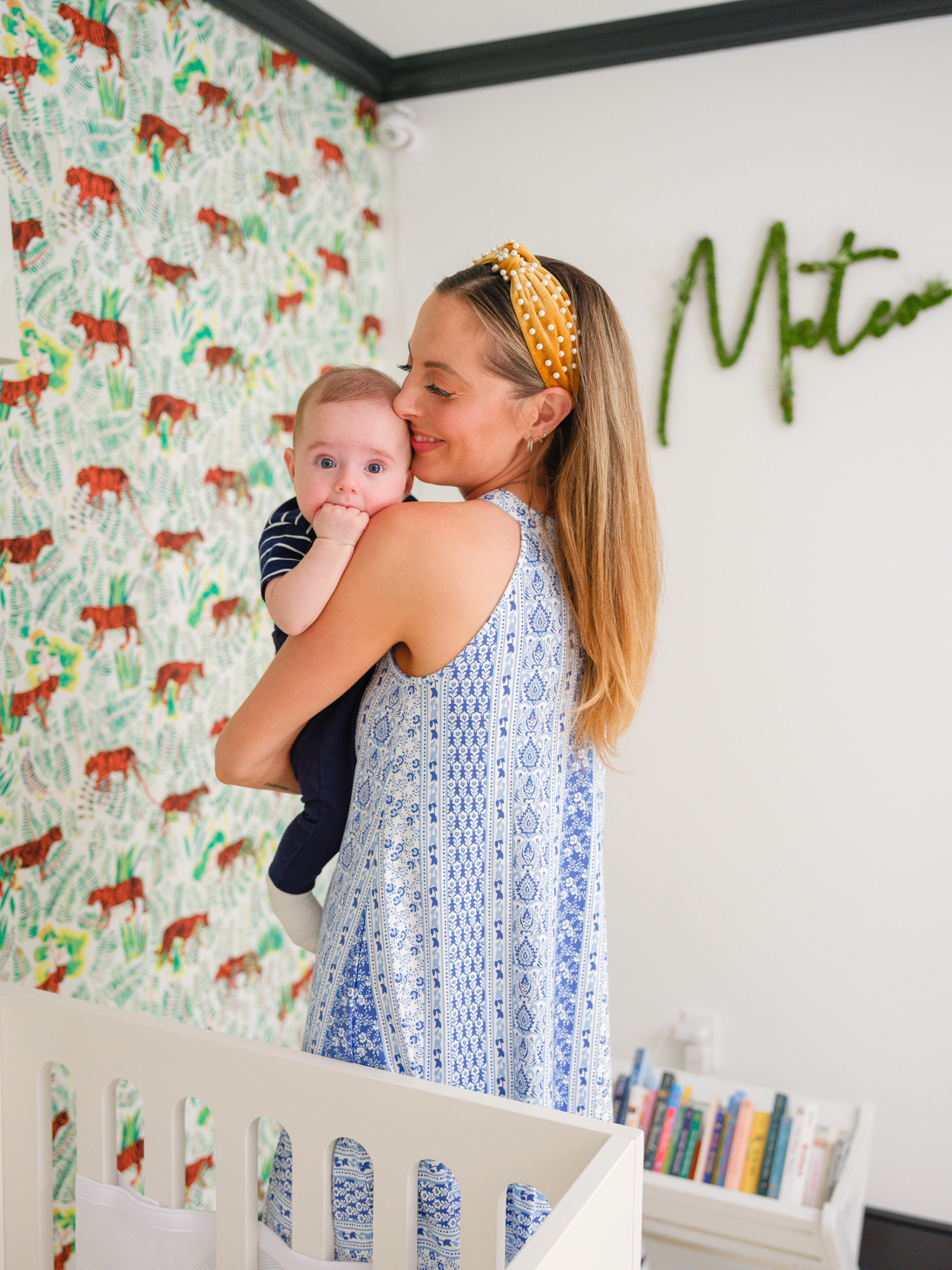 Anyway, I knew it was time to pull the swaddle, but getting him used to sleeping with his new trick was ROUGH. He adapted pretty quickly to the sleep sack (people suggested I try the Merlin, but neither of my other two kids liked it and since his startle reflex was already gone, I figured I’d bite the bullet and just train him to a sleep sack instead of having to train him AGAIN to one once he outgrew the merlin).

The real pain was that now that Mateo knew how to roll over, he did it almost instantly upon laying in his crib…and he didn’t know how to roll BACK.  He would be ok for a little bit on his tummy, and even fall asleep that way, but he wouldn’t like staying that way for long stretches, and would cry hysterically once he figured out he couldn’t really move from a tummy position.  Naps were hit or miss, but nights were BAD. Bad, bad, bad.  I ended up in tears quite a few times, not knowing what the best thing was to do. One night I ended up going in there to flip him to his back something like 10 times, until I realized how crazy I was being.

So many of you recommended this to me!

This the sleep sack Mateo is wearing! 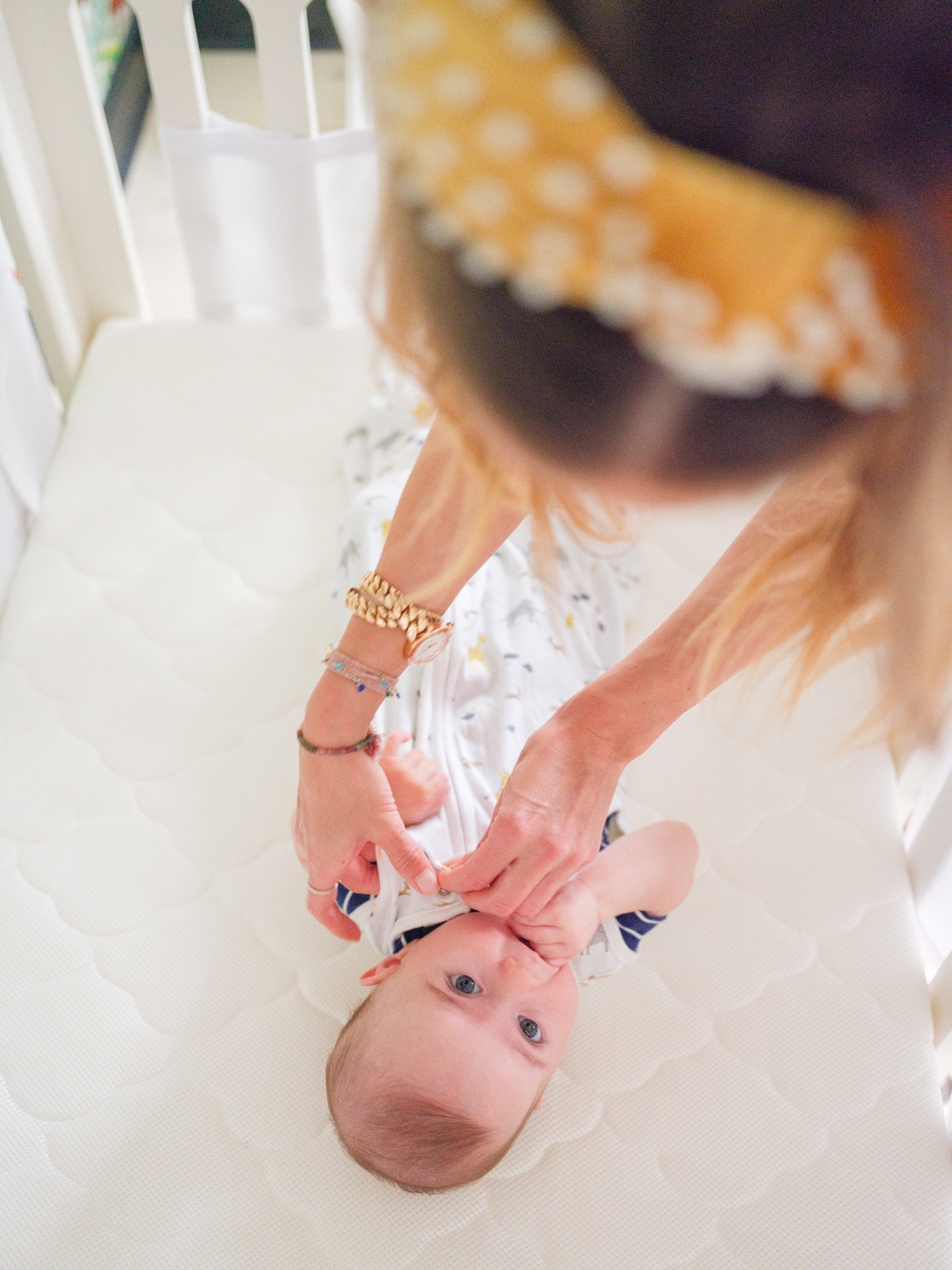 So instead, I focused hard on tummy time. My goal was to get him comfortable rolling both ways ASAP so that he would be able to handle himself in his crib better and adjust himself accordingly.  About 30 minutes after each bottle, we hit the gym. LOL. After two days of consistent tummy time, he started rolling over front to back as well!

I wish I could say the nights were instantly easier, but it took a while for him to get comfortable adjusting himself as needed. 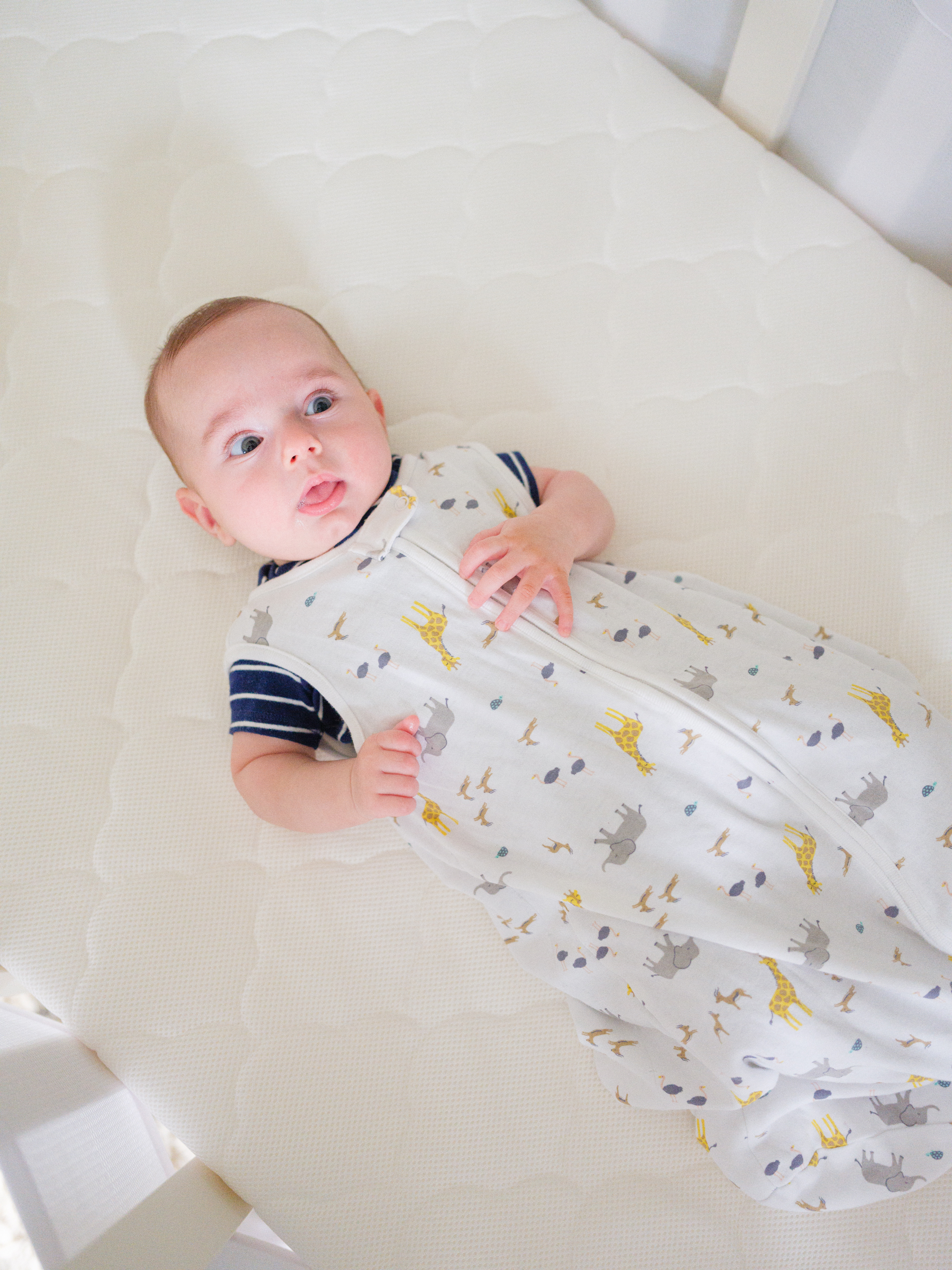 For a week and a half, he woke up in the night about every two hours, and would take 20-30 minutes to fuss himself to sleep. I would watch the monitor like a hawk making sure he was safe, and trying to encourage him to self soothe and figure it out. It would take me at least thirty minutes to fall asleep after he fell asleep because I was so wired from being on edge watching him! Thankfully his cries never got crazy intense, it was mostly just uncomfortable fussing.

By the end of the second week, he was sleeping through the night again! Now we are almost three weeks in to him sleeping with the sleep sack and he’s so much more comfortable. He easily transitions from back to front and front to back, and is rolling all over the place.  I put a mesh bumper on his crib that I used with both other kids so that his limbs don’t get stuck between the slats of the crib. 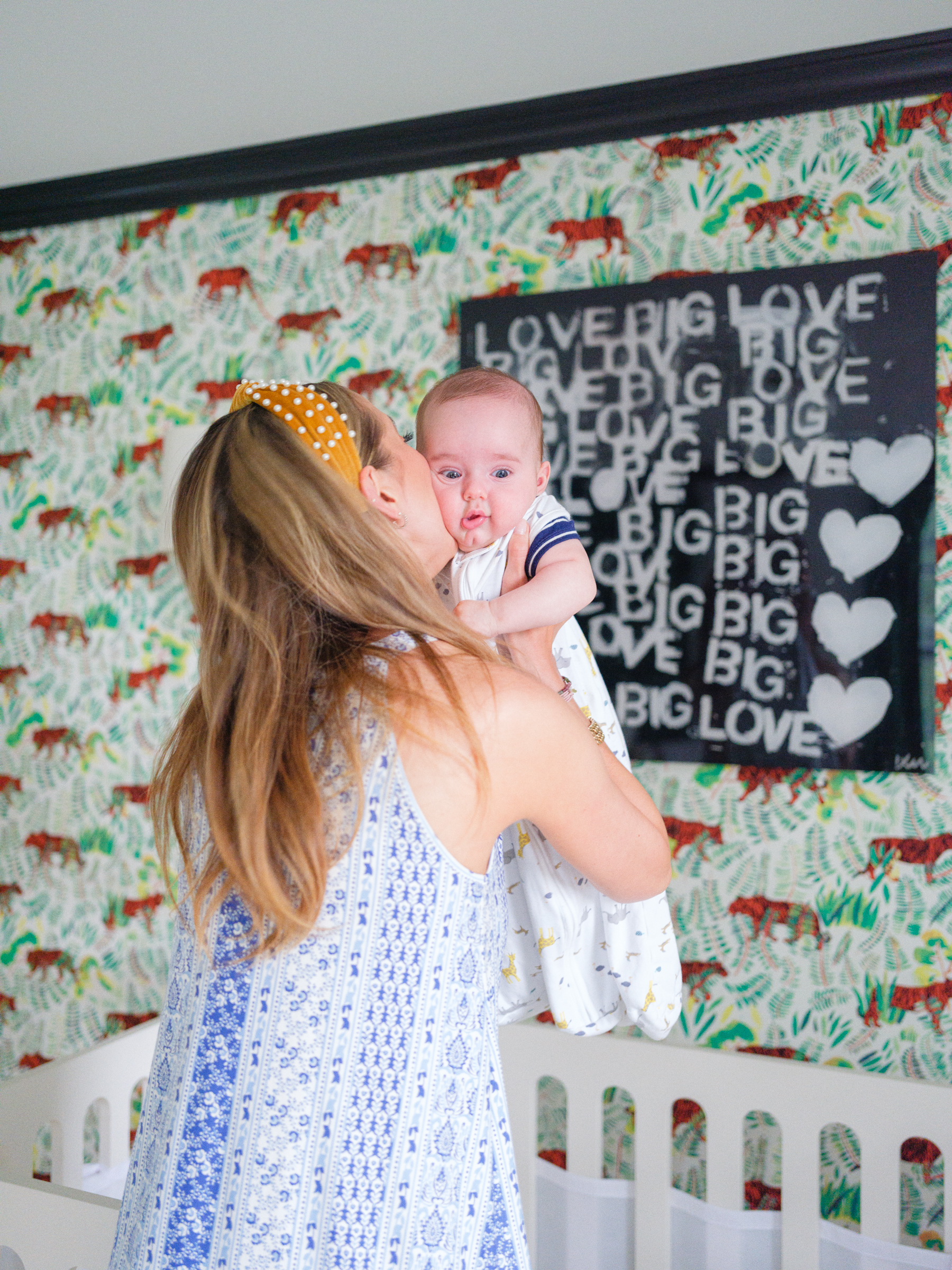 Even though I’m what you’d call a “Seasoned Mom” at this point, these stressful milestones and transitions still aren’t easy. Any time we go through them we always worry for our babies and end up awake and sleepless helping them figure it out. My point being, whether you’re going through this with your first child or fifth, make sure to remind yourself that these phases do pass.  We emerge from them more closely bonded with our children, and more seasoned in our parenting– and in our universal experience AS parents. We all know what it’s like to be up with a child in the middle of the night, feeling like the dawn will never come, and neither will the end of whatever hurdle we are crossing.  But it does, it always does.

I can’t wait to see what teething is like this time around! LOL. Feel free to leave your swaddle or sleep sack transition tips in the comments below! 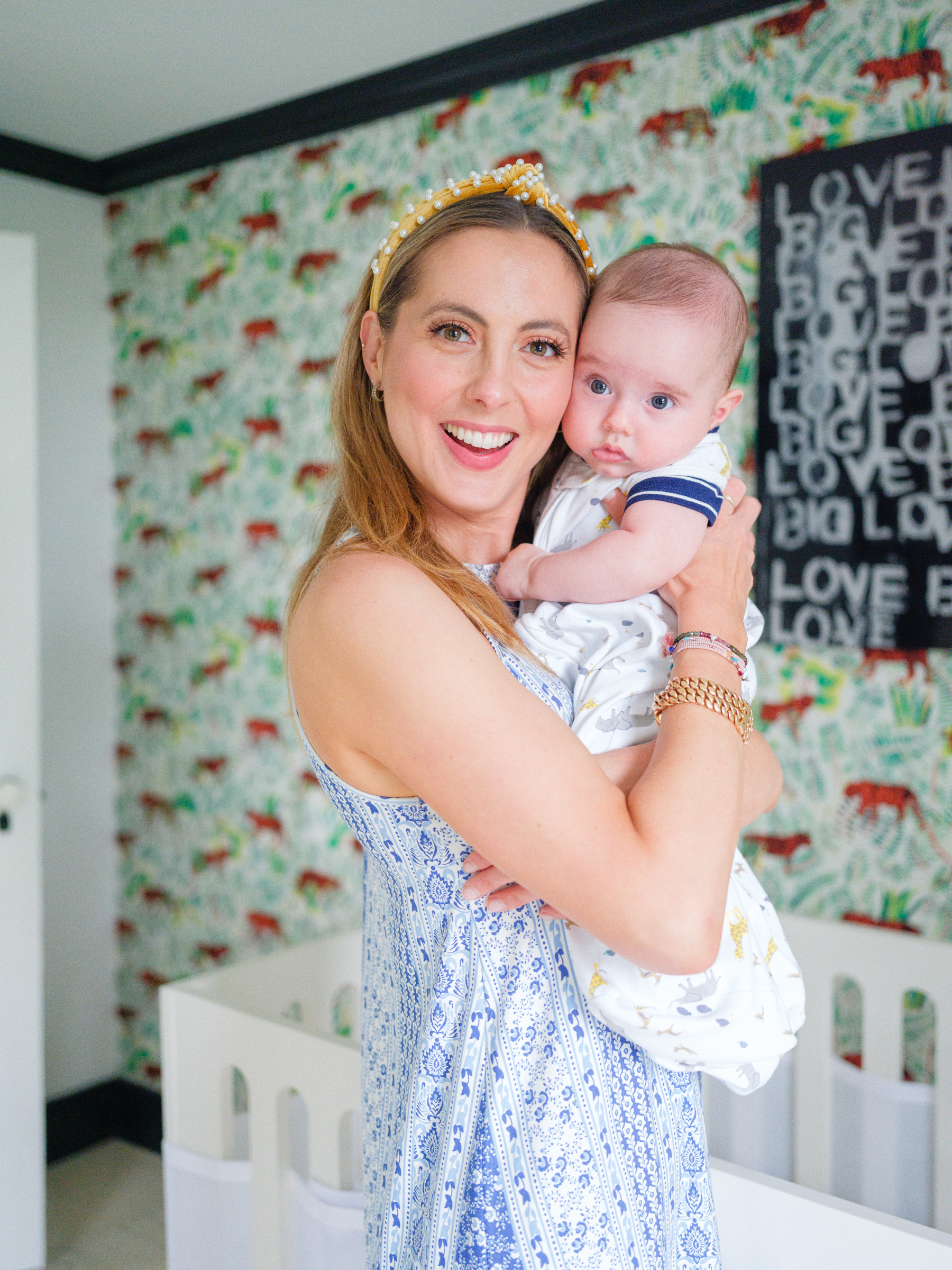 My Bedtime Routine with Three Kids