*I am not a doctor, and as such cannot give medical advice. This is my own personal experience with my child. Please consult your pediatrician before making any changes to your child’s feeding plan!

At Mateo’s four month checkup, I was really surprised when my pediatrician gave me a handout all about introducing him to solid foods! I had remembered starting a bit later with my other two (six months), but she told me that the “Early And Often” method is now being employed when it comes to introducing babies to different foods and possible allergy triggers.  Besides honey (which is a definite NO until age one) the idea is that by letting babies taste a lot of different foods all of the time, it exposes them early and builds their immune systems. 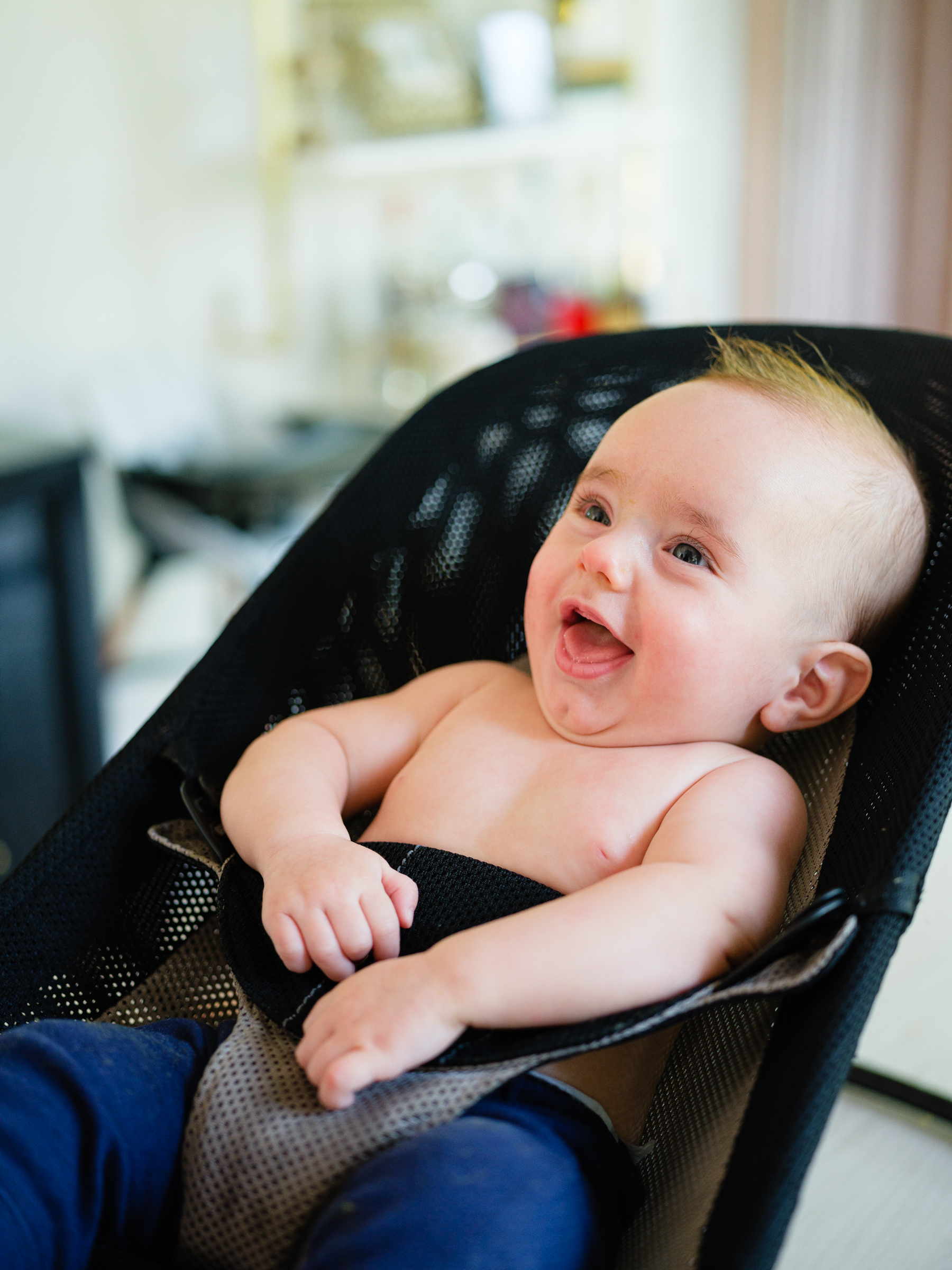 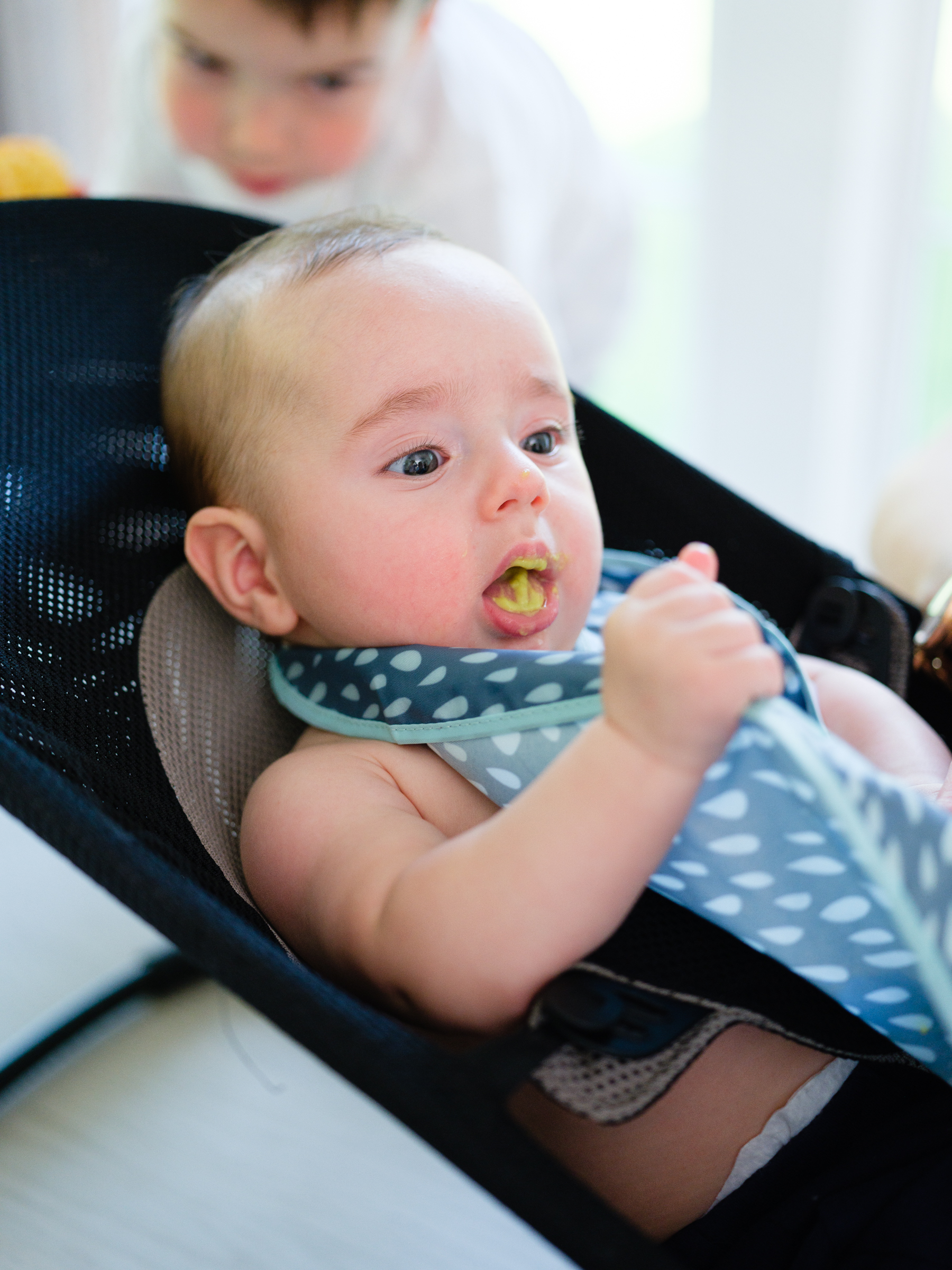 She told me I could start with whatever I liked, but that her favorites for first foods were:

She said I should start by offering Mateo a few spoonfuls, once a day (about an hour after a bottle of formula) for a couple of days. Then I could increase to about 1-3 ounces once a day for about five days, and increase as he seemed to enjoy it.

She told me to introduce one food at a time every couple of days at first, but then I could give him blends of a few foods, and even proteins!  She explained that it was better to offer him small doses of possible allergens more often, in the hopes that the reactions would be small, and not that severe — and that his body could get used to new foods at a young age. 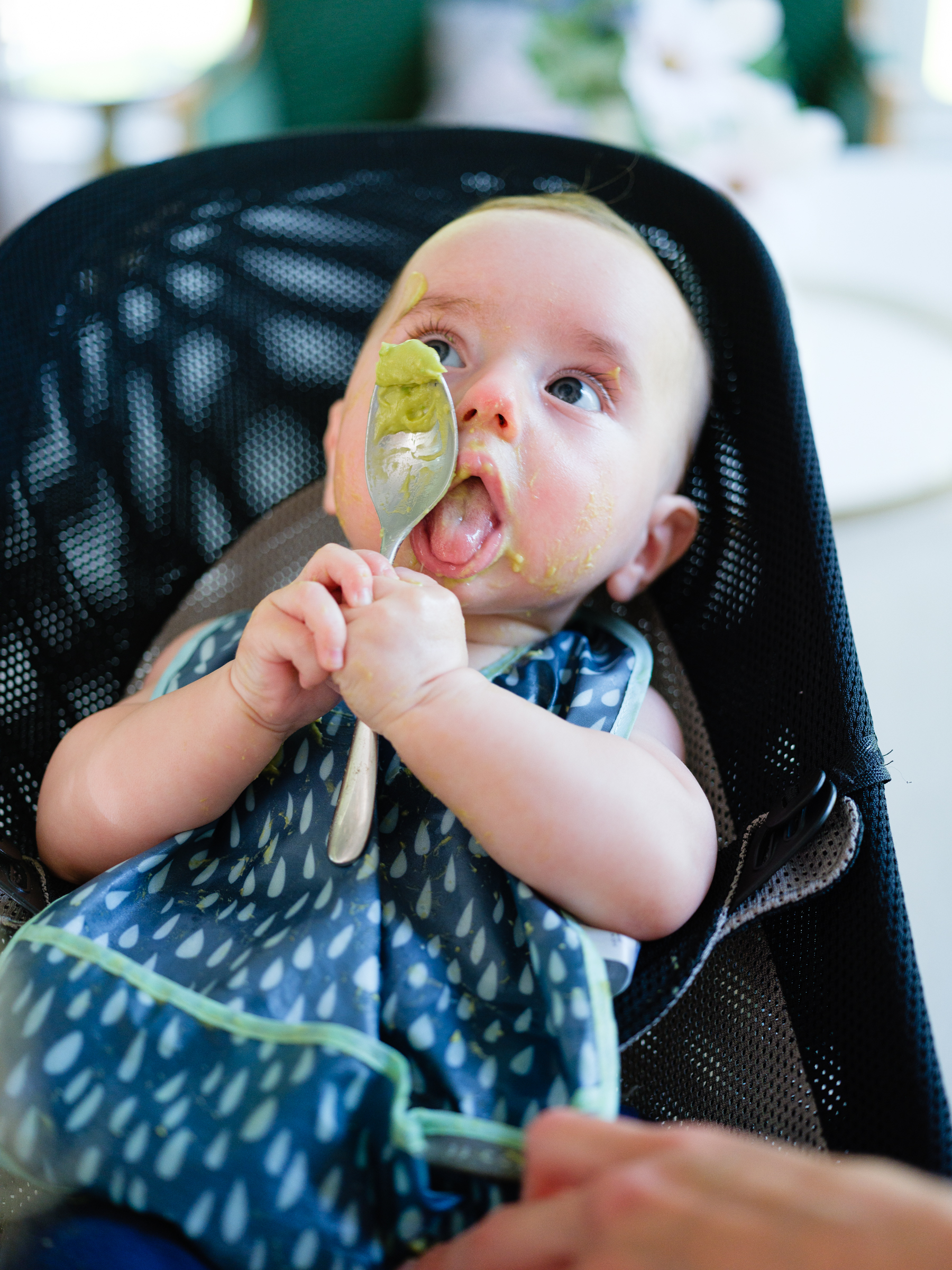 Since I had both avocado and banana at home, I decided to begin the day after his four month checkup. I polled everyone on Instagram to help me decide between avocado and banana, and I got a ton of messages saying that bananas had made some Moms’ newborns pretty constipated, so I settled on avocado!

When my first two kids started solids, I started them on totally different foods. Marlowe started on peas, and Major started on pears. I had gotten advice to start kids on some kind of green or veggie at first, because it indicates their ability to like vegetables later on. I thought it was super bogus advice at the time, but looking back, Marlowe now LOVES veggies and Major is a little Sweets Hound! Bizarre, but maybe there is something to it?

Anyway, I felt good about starting Mateo on a really healthy and nutritious green food. 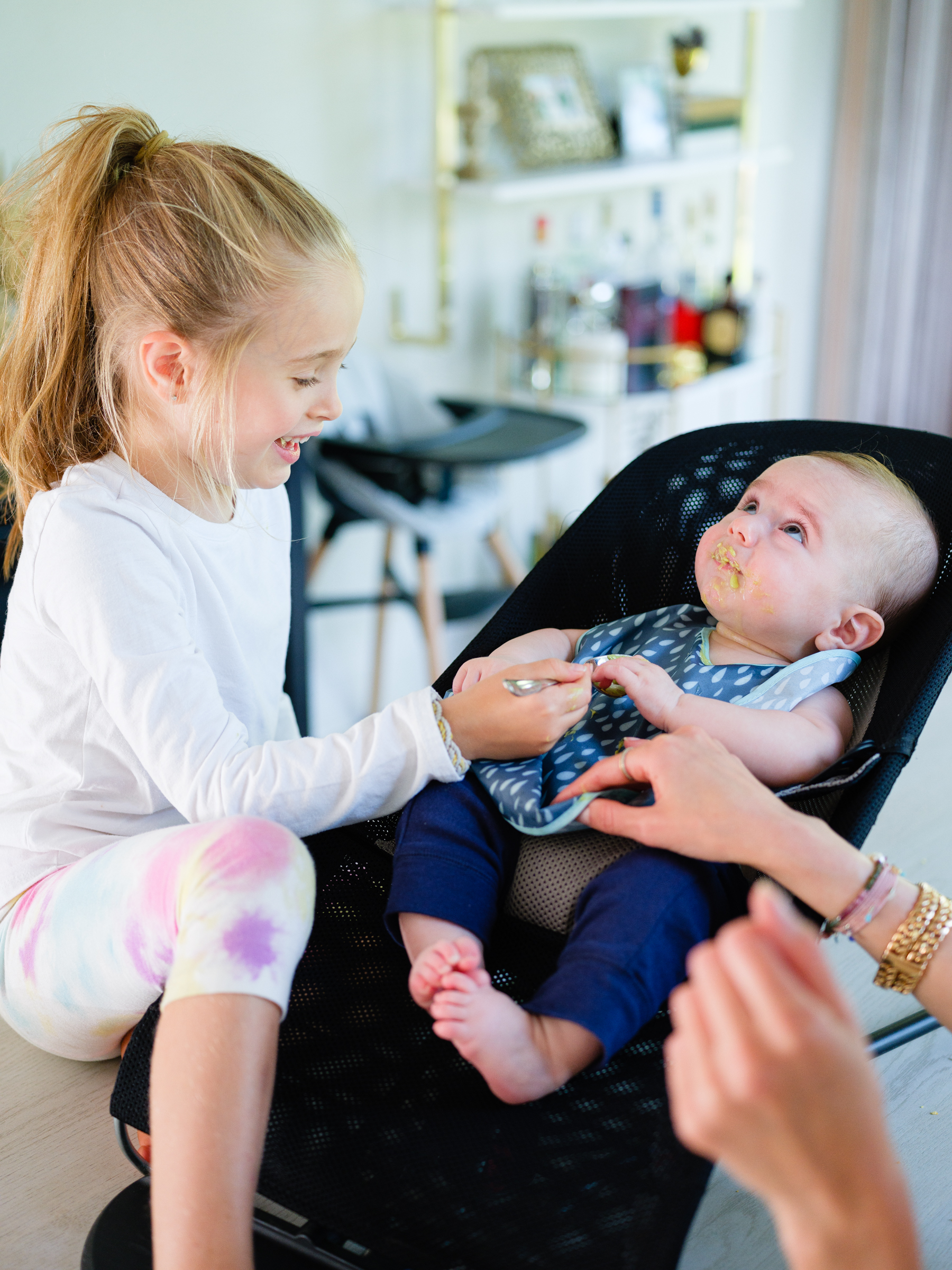 I chose a really ripe avocado and smashed it up super small, adding a teaspoon of formula to make it creamy.

Marlowe and Major were so excited to watch him eat his first food!

At first, he didn’t know what to do with it, and thrust his tongue out instead of swallowing it.  It took about four small spoonfuls to finally get him to swallow a little! When he did, he seemed perplexed but definitely interested.  He didn’t gag like Marlowe had during her first feeding (maybe peas weren’t the best choice. LOL).

The next day he had avocado again at the same time of day. The day after that I tried some baby oatmeal and he LOVED that.

I started mixing some baby food jars in to the oatmeal to let him try different foods before committing to making a big batch myself.

I made baby food for Marlowe and Major as infants, but tried to do it in batches and freeze.

Check out some of my baby food blends in this post. 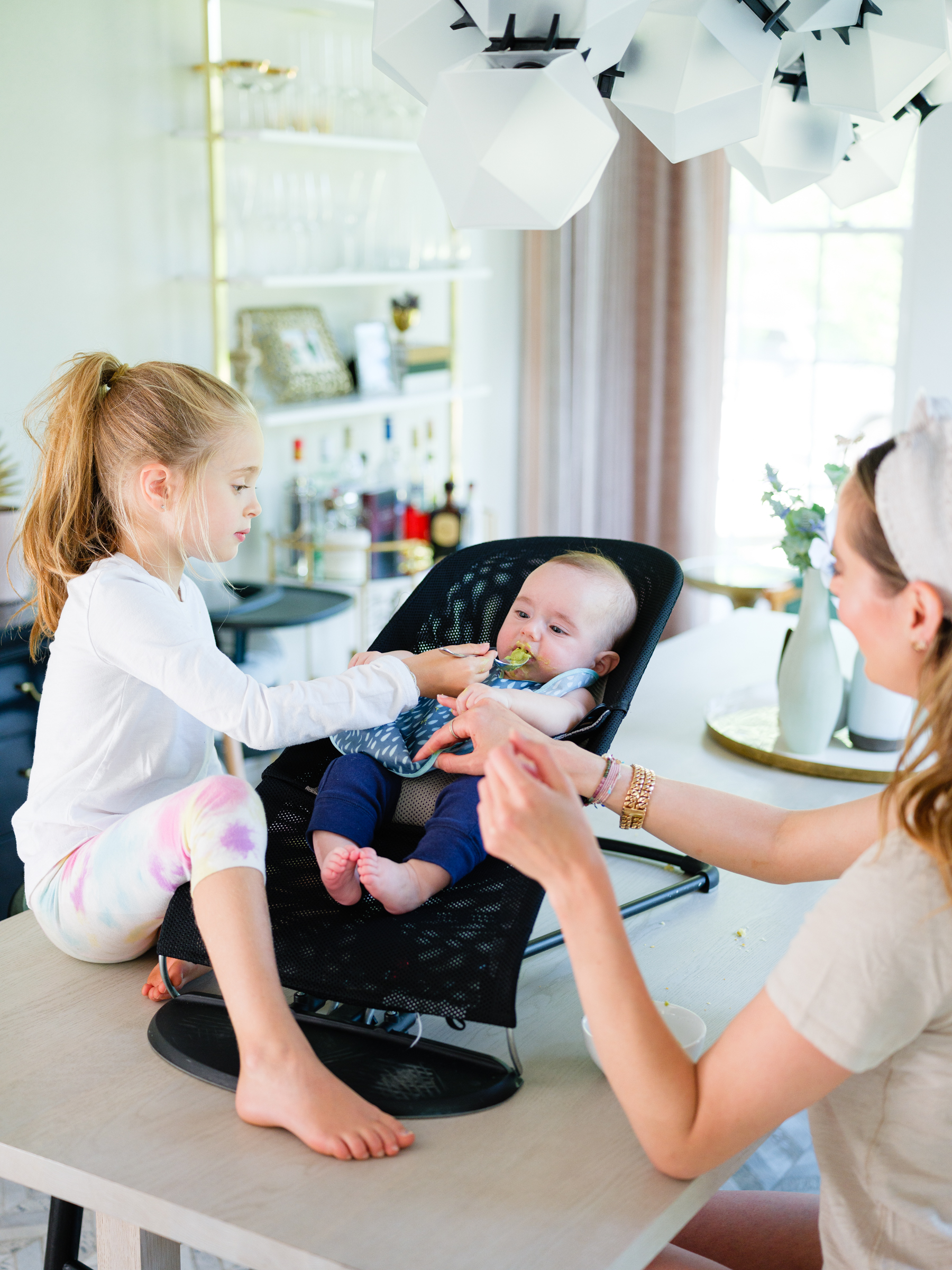 So far, he has eaten everything from peas and pears, to sweet potatoes, banana, spinach, kale, pineapple, apple, chickpeas, quinoa, and yogurt.

I haven’t introduced chicken, beef or fish yet, but I plan to this month! I am going to try peanut butter at six months as well.

I really love that Mateo can experience food now, and that his little palette can get used to eating a lot of the foods that his big brother and sister enjoy.

He has a HUGE appetite and is now taking in 3-4 ounces of baby food about an hour after his bottle at breakfast, lunch, and dinner!

His appetite for the formula has gone down a little as a result. He was doing 8 ounces a feed before he started solids, whereas now he drinks about 5-6 ounces of formula, and then fills up on food. 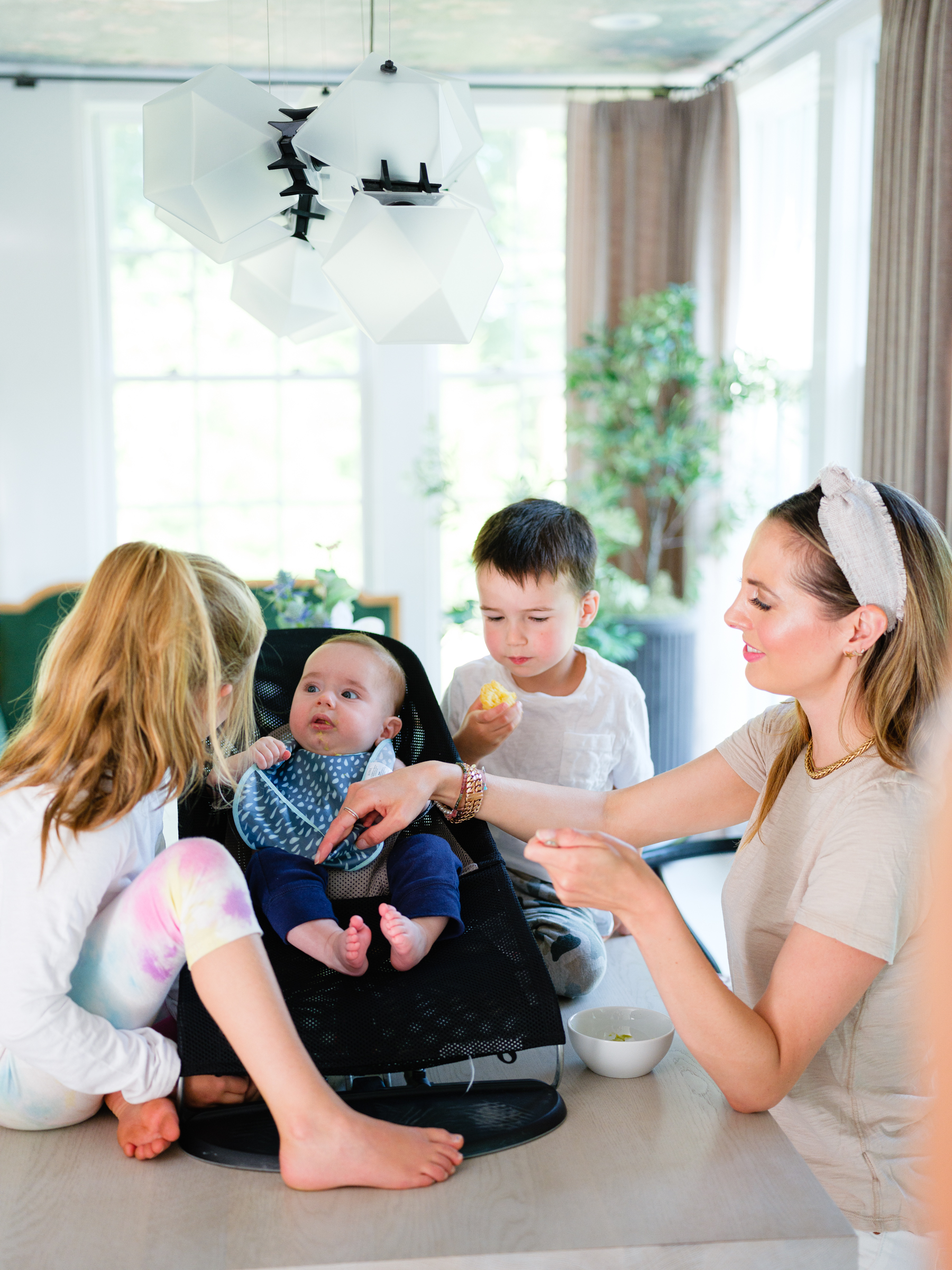 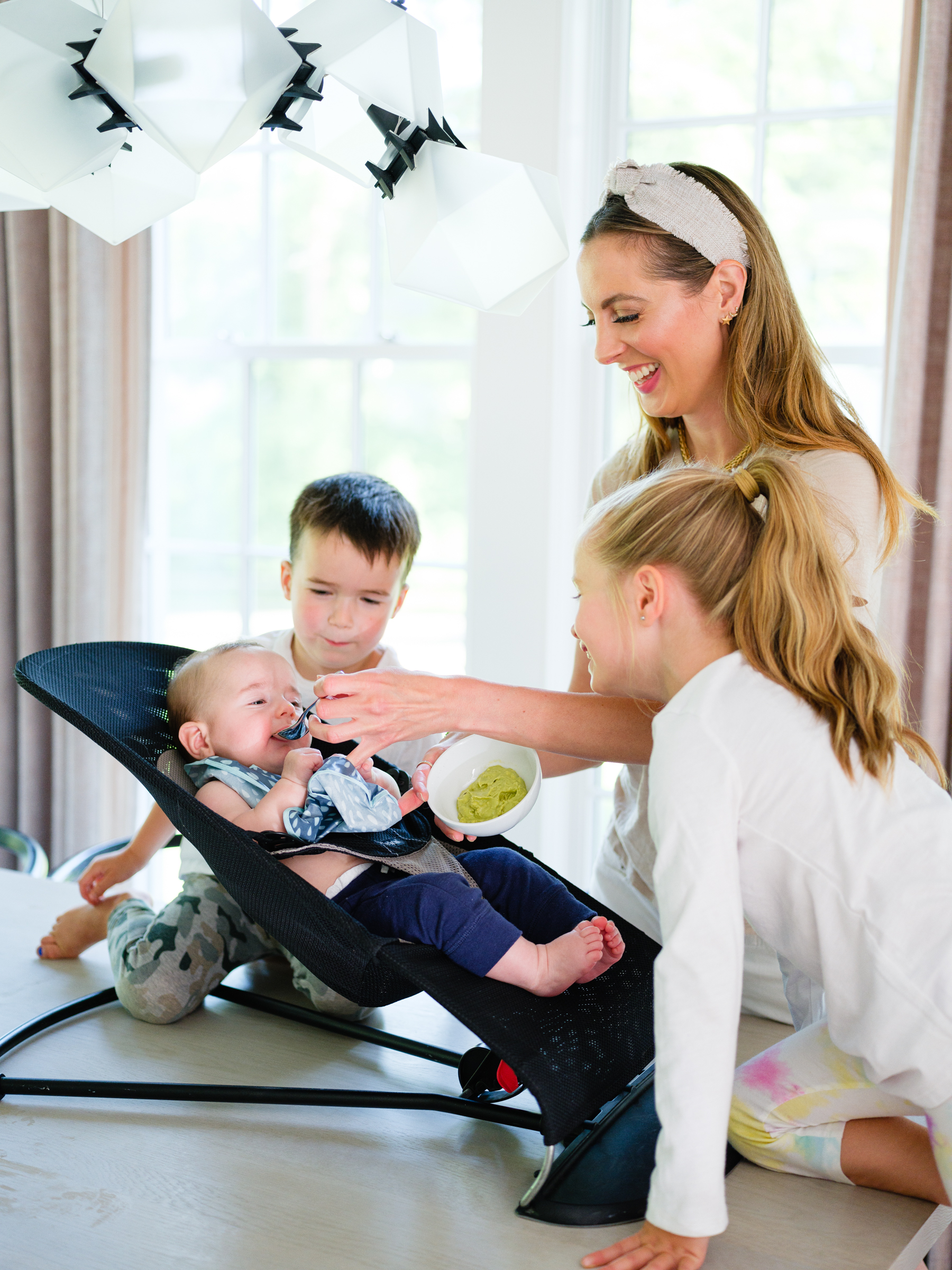 I can’t wait to explore more baby food blends to share with you guys in the coming months!

I’m also putting some of my favorite feeding-related products below that I love using with Mateo.

Let me know in the comments below if you have any questions that I didn’t answer in this post!

This high chair is so chic, comes in beautiful colors, and has been easy to clean. Plus, it turns in to a chair with kid sized legs to put on when they can sit on their own!

This thing steams and blends everything from veggies to meat and fish in 15 minutes, and it was designed for one-handed use, so you can make food for your kiddos even while holding them!

These bowls are microwaves and top rack dishwasher safe, and they suction to surfaces so you don’t have to worry about about your kiddos accidentally making a mess!

These spoons are BPA-free and top rack dishwasher safe, and the rounded shape is soft on baby’s gums.

These are the best! You put food inside the mesh and snap them shut, and then babies can gnaw on the mesh to get the taste of certain foods without the worry of choking hazards!

These bibs have pockets to catch dropping food, and are made from wipeable material that makes them easy to clean. They’re also v stylish!